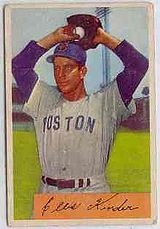 Ellis Kinder pitched 20 seasons in organized baseball, from 1936 to 1957, 12 in the major leagues and 9 in the minors, losing one year to the Military (1945) and another to suspension while in the minor leagues (1943). He served in the Armed Forces for one year during World War II (BN).

Although Kinder spent 12 years in the majors, he didn't make his debut until he was nearly 32 years old. Kinder pitched for the St. Louis Browns, Boston Red Sox and Chicago White Sox from 1946 to 1957. He set the American League record for most consecutive games pitched, none complete, in 1953 (69). He broke the American League record for most games pitched that same year, a record that had been set way back in 1908 when Ed Walsh - who was mainly a starting pitcher - pitched 66 times for the Chicago White Sox. Both records have long since been broken, as he was mainly a precursor of a new type of reliever usage. He was named top American League pitcher by the Sporting News in 1949, when he went 23-6 with a 3.36 ERA for the Red Sox, back when he was still a starting pitcher.

He worked at various jobs - as a housepainter, taxicab driver and repairman. He died at age 54 at Baptist Memorial Hospital in Memphis, TN from complications three weeks after undergoing open heart heart surgery and is buried at Highland Memorial Gardens in Jackson, TN.