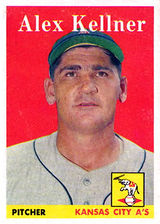 Pitcher Alex Kellner made his pro debut in 1941 with the Tucson Cowboys of the Arizona-Texas League. He served in the U.S. Navy during World War II before reaching the majors with the Philadelphia Athletics in 1948. The next year, in 1949, he had his finest big league season, going 20-12 with a 3.75 ERA for the club. Ironically, he then lost 20 games in 1950.

He was one of the longest reigning A's pitchers of his era (10 years) and pitched his milestone 100th victory for the St. Louis Cardinals in his final major league season (1959).

His younger brother, Walt Kellner, was a teammate with the Athletics in 1952 and 1953. His nephew Frank Kellner and father Pop Kellner both played professionally as well.