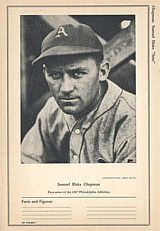 "I don't think I ever saw a ball player come on overnight as Chapman did in the 1941 season." - Joe DiMaggio, from Lucky To Be A Yankee

Sam Chapman was an American League All-Star who enjoyed a mammoth 1941 season before losing all or part of the next four seasons serving for Uncle Sam.

Chapman was a dual sport threat in his schoolboy days. He played halfback on the California Bears football team that won the 1938 Rose Bowl and is a member of the College Football Hall of Fame [1]. Sam was drafted by the NFL's Washington Redskins after his college career. He had also played baseball at Cal and, following graduation, chose the diamond over the gridiron, signing with Connie Mack and the Philadelphia Athletics. Prior to his debut with the A's in 1938, he had never seen a major league game.

Chapman was a regular upon his May 16, 1938 debut, enjoy three solid but hardly superstar seasons prior to 1941. That summer, his bat exploded, as he hit .322/.378/.543 with 25 home runs, 106 RBI and 97 runs scored. Playing for a club that had not been serious contenders in a dog's age, Sam's big '41 was outshined by a couple of young pups in big cities, Joe DiMaggio and Ted Williams. It is likely why, in spite of such numbers, he was not chosen for the year's All-Star Game. After establishing himself as a big-time bat, and with World War II beginning to rage, Sam ended up enlisting in the US Navy in November, not returning until September 1945. He had a couple of solid seasons on his return but nothing like his magical '41, finally going to an All-Star Game in 1946 with an overall .261/.327/.429 line and 20 home runs. He then had a big 1949 season, in which he batted .278/.367/.455 with 24 home runs, 108 RBI and 89 runs scored. He continued to play for the Athletics until being traded to the Cleveland Indians in 1951, his final big league season. He pressed on after his major league days, playing for the Oakland Oaks of the Pacific Coast League.

Chapman died at age 90 after suffering from Alzheimer's disease. He had been inducted onto the Philadelphia Baseball Wall of Fame in 1999.