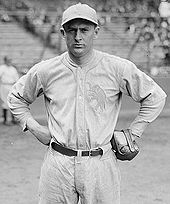 Chick Galloway's playing career ended suddenly on July 25, 1928 when, while a member of the Detroit Tigers, he was struck in the head by an errant throw while standing around during batting practice, resulting in a skull fracture. However, he remained active in the game in other capacities for many years after that.

He took over as manager of the Spartanburg Spartans in mid-season 1938. The team finished in 7th place in the South Atlantic League with a record of 54-82.