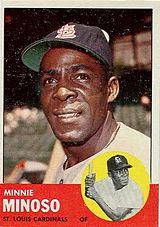 "Minoso was one of the best competitors I've ever seen. . . He'd run into walls and get on guys who weren't putting out. He was also one of the nicest guys I've ever known when the game was over. . . I had more respect for him than anyone I've ever met." - Jim Derrington in a 1991 interview appearing in the L.A. Times

Minnie Minoso was a seven-time All-Star outfielder, winning three Gold Gloves who played parts of 17 often highly productive years in the majors, hitting over .300 in eight seasons. As good as he was young - finishing 2nd in the 1951 AL Rookie of the Year race with a sizzling 326/.422/.500 line and league leads in both triples and steals - he actually had some of his best years after the age of 30. Between 30 and 34, he reeled off five straight .300 seasons, with three All-Star selections, three Gold Gloves, and MVP votes in each. His WAR7 total ranks him 14th among all left fielders (as of 2019), putting him higher than many Hall of Famers, including Joe Medwick, Willie Stargell, Jesse Burkett, Lou Brock and others.

Following a cup of coffee with the Cleveland Indians Single A farm club as a 23-year-old at the end of 1948, Minoso spent two very solid seasons on their Triple A team before making it to the Bigs for good in 1951. Along the way, he had a short stint with the Indians in 1949, but was unable to crack the big league team's outfield which consisted of Dale Mitchell (in the middle of a four-year .316, .336, .317, .308 run), slugging Larry Doby (who'd broken the American League color barrier with the Indians in 1947 just three months after Jackie Robinson shattered the National League's, two hot years into a seven-straight skein of All-Star appearances), and journeyman Bob Kennedy (once a promising 18-year-old prospect with the 1939 Chicago White Sox, then playing his most productive years with the Tribe in his late 20s). In 1951, he was traded to the Chicago White Sox after only 8 games and homered in his first at bat for the team, launching a seven-year run during which he was one of the team's biggest stars. because the Chicago Cubs had not yet integrated, he was the first black major leaguer to play in Chicago.

After his terrific rookie season Minoso was in the majors for the rest of his big league career, but not for good, returning to the minors and then an extended stay in the Mexican League after 1964.

Minoso made his big league debut with the Indians in 1949. Following a short stint at the beginning of that year, he returned to the minors for the remainder of 1949 and all of 1950, making the Indians' roster again at the start of 1951. On April 30th, he was traded to Chicago as part of a three-team deal that also included the Philadelphia Athletics; others involved in the trade were Dave Philley and Gus Zernial, who went from Chicago to Philadelphia, Paul Lehner and Lou Brissie who went from Philly to Chicago and Cleveland, respectively, and Ray Murray and Sam Zoldak who made the trip from Cleveland to Philadelphia. He retired following the 1964 season at 38. A slashing hitter and versatile all-round player, he showed good extra base power, was a productive RBI man, led the AL in steals three times, and flashed a Gold Glove in the outfield.

During his career Minoso was traded several times, the last three for solid talent: first for future 300-game winner Early Wynn, next in a package that included future Detroit Tigers standout Norm Cash, and last for .300 hitter and high OBP man Joe Cunningham.

In addition to leading the AL at times in hits, doubles, triples, steals, stolen bases, total bases, and sacrifice flies, he dominated two other categories during his playing days, one good, one not: he topped the junior circuit in hit by pitches 10 times (in a 12-year period), and led in caught stealing 6 times in an overlapping 9-year span. Along the way, he was in double digits in triples, topped 20 home runs, and drove in over 100 four times apiece. Eight times he topped .300 in batting average, peaking at .326 his rookie year and .320 in 1954.

As a player, the fiery Minoso was well respected, finishing fourth in the MVP voting four times. While his Gray Ink score of 189 is well above the average Hall of Fame score of 144, his black ink tallies of 88 and 35 fall measurably below their 100 and 50 baselines. Once eligible, he got as high as 21% of the BBWAA Hall of Fame vote; in 2007 he received 15% of the Veterans Committee vote, in the 2014 election he was at 50% in a year when there were several strong candidates and no one was elected. Minoso was part of the inaugural class of inductees in the Latino Baseball Hall of Fame in 2010.

Although none of the ten most similar players to Minoso (according to the similarity scores method) as of December 2014 are in the Hall of Fame, Minoso has a higher Adjusted OPS+ than any of them. Though his 130 is the same as Hall of Famers Roberto Clemente, Carl Yastrzemski, and Dave Winfield, the most similar player career-wise according to the method is Carl Furillo.

Although one of the premier players of his era, Minoso is best known today for a variety of age-defying feats staggered along an artificially prolonged but fan-delighting career. He and ancient Nick Altrock (born 1876, last appearance as a 47 year-old in 1924) are the only players to appear in a game in five different decades. Altrock played in a single game in 1924 to get his fifth, Minoso was activated as a publicity stunt both in 1976 and 1980 to equal the mark. He wanted to come to bat in 1990, but MLB would not allow it.

Minoso is the third-oldest player to hit safely in a major league game, during the 1976 season. He was 1 for 8 and his only hit came on September 12th. Hall of Famer Jim O'Rourke hit safely at age 54 on September 22, 1904, and Charley O'Leary singled at the age of 58 in 1934. At the time of the hit, Minnie was widely hailed as the oldest major leaguer to get a hit, based on an erroneous 1922 birthdate.

Despite Minoso's claims in his own biography, his actual age remains in question. His long listed birth date of 1922 (which remained associated with him until the 21st century) makes him three years older than his since claimed date of 1925. It defies "baseball age" logic for a player to claim he is older rather than younger than he is. Only Minnie knew for sure... perhaps not even he knew. As a result, when he died from a torn pulmonary artery in 2015, obituaries said he was 92, although he was more likely 89.

This manager's article is missing a managerial chart. To make this person's article more complete, one should be added.
Retrieved from "https://bpv.baseball-reference.com/bpv/index.php?title=Minnie_Miñoso&oldid=1114396"
Categories:
Hidden category: