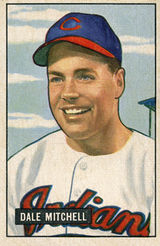 A master batsman, Dale Mitchell was one of baseball's greatest contact hitters of his time, while compiling a .312 lifetime batting average in his rather short, but illustrious, 11 years of major league play. During his seven full seasons as a regular, Mitchell hit .300 or better six times and was incredibly tough to strike out; yet, he never came close to attaining 20 homers or 100 RBI in a season. He was a key player on the 1948 World Series champion Cleveland Indians and made the All-Star team in 1949 and 1952 and had a sterling career on-base-percentage of nearly 37 percent.

Born in Oklahoma, Mitchell was a legendary player at the University of Oklahoma, where he set records for highest single-season batting average (.507) and highest college career batting average (.467) that still stand. Prior to his major league career, he worked for the Oklahoma Natural Gas Company along with future minor league star Joe Bauman, delivering bills. Turning pro, Mitchell hit .337 for Oklahoma City in 1946, his only season in the minors.

In his time as a regular player, Mitchell only once hit under .300, and that was when he hit .290 in 1951. He was in the top 5 in the league in batting average in 1948, 1949, and 1952. He didn't have much power, getting only 41 home runs in a career of more than 1100 games. Mitchell struck out (only 119 career strikeouts in nearly 4000 at-bats) an average of once every 36 plate appearances - easily one of the best ratios in ML history. In fact, during 7 seasons with at least 500 official at-bats, Mitchell struck out only 108 times for an amazing average of only 15 per year. Toward the end of his career he became a pinch hitter, perhaps because his range in the outfield, never great, seemed to be slipping.

He was the leadoff batter in the 1948 World Series for the Indians, hitting ahead of Larry Doby and Lou Boudreau. He had four hits, including a double and a homer. In the 1954 World Series, he was strictly a pinch-hitter, going 0 for 2 with a walk. His 23 triples in 1949 was an astounding total. No one had hit 23 triples in nearly 20 years (since Adam Comorosky in 1930), and no one did so again until Curtis Granderson did, 58 years later.

In July 1956, the Brooklyn Dodgers bought Mitchell from the Indians. He finished out his career at age 34 hitting .292 for the Dodgers for the rest of the season. Despite his stellar career, his next-to-last last major league at-bat is easily his most significant and memorable: he was called out on strikes as a pinch hitter in the 1956 World Series as the final out in the perfect game pitched by Don Larsen of the New York Yankees in Game 5 on October 8th. Mitchell claimed the called third strike was actually a ball, and since he had great strike zone awareness and almost never struck out, it's quite possible that he was right. His final at-bat came in Game 7, when he grounded out as pinch-hitter in the 6th inning with the game already lost, for all intents and purposes.

The University of Oklahoma team has played in the L. Dale Mitchell Baseball Park since 1982. He died in Tulsa, OK in 1987. He attended high school and is buried in Cloud Chief, OK, which has since become a ghost town.