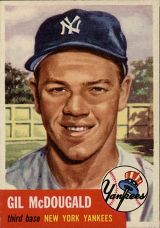 "Gil was one tough ballplayer. He could also be hard-headed. I'll always remember that crazy stance of his and he didn't want to change. He was a great guy to have playing behind you. He played all of those positions and played them well." - Whitey Ford

An extremely versatile player, Gil McDougald excelled defensively at second base, third base, and shortstop over a ten-year career with the New York Yankees. Manager Casey Stengel used this versatility to plug McDougald into whatever hole in the lineup he had that season or to find the most favorable match-up among his middle infielders on a given day. Offensively, he was never a powerhouse player but had no real weaknesses. He hit for a solid average, displayed good power for a middle infielder, and had a solid batting eye.

Born in San Francisco, McDougald attended the University of San Francisco before signing with the Yankees prior to the 1948 season. He spent three years in the minors, hitting at least .336 at each stop. Originally strictly a second baseman, he joined the big league club in 1951, splitting time between second and third. Mickey Mantle was also a rookie on that squad, while Joe DiMaggio was in his last season. On May 3rd of that year, he tied an American League record by recording 6 RBIs in one inning, hitting a grand slam and a triple against the St. Louis Browns. He ended the year with a .306 average (tops on the club), 14 home runs, 63 RBI, and 14 steals, and went on to win the 1951 American League Rookie of the Year Award and finish ninth in the Most Valuable Player voting. In the World Series that October, he became only the third player to hit a grand slam in the Fall Classic, connecting off New York Giants hurler Larry Jansen in Game 5.

Seeing most of his playing time at third base in 1952, McDougald's average slipped to .263, but he made the All-Star team for the first time in his career. After three more solid seasons, splitting time between second and third, he was moved to shortstop in 1956 as Phil Rizzuto's career winded down. He responded by hitting a career-best .311 that summer, finishing seventh in AL MVP voting, and he led the circuit with 9 triples the following year, when he finished fifth in the MVP race. However, he earned a different form of notoriety on May 7, 1957, when he hit a line drive that struck Cleveland Indians pitcher Herb Score in the right eye, damaging the star pitcher's career beyond repair.

McDougald had the finest World Series of his career in 1958, hitting a game-winning 10th-inning homer in Game 6, and ending the Series with a .321 average, a pair of home runs, 4 RBIs, and 5 runs scored. However, he retired at the relatively young age of 32, following the 1960 season. He was a five-time All-Star, joining Pete Rose as the only players to be selected for the game at three different positions. He also played in eight World Series, hitting 7 home runs, clubbing 24 RBIs, and scoring 23 runs, as the Yankees were victorious five times.

After his playing days, McDougald was a coach at Fordham University for seven years. Away from the diamond, he ran a New Jersey maintenance company. He suffered progressive hearing loss as he got older, the result of being struck by a line drive hit by Bob Cerv during batting practice years earlier. He eventually went deaf, which was repaired by cochlear implant surgery in 1995.

McDougald passed away at the age of 82 in 2010 after suffering from prostate cancer.