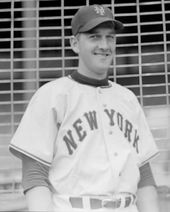 Larry Jansen won exactly 122 games in both the major and minor leagues, including leading the league once at each level. He was the last AAA player to win 30 games in a year and was the winning hurler in the game in which Bobby Thomson hit the Shot Heard 'Round the World. He twice won 20 games in the majors (once leading the National League) and also made two All-Star teams, winning one All-Star Game. Known for his control, he finished first or second in the National League in fewest walks per 9 innings on four occasions and twice led in strikeout/walk ratio.

Youth and a Red Sox mistake[edit]

Jansen grew up on a farm in the Dutch community of Verboort, OR and played semipro baseball. [1] Boston Red Sox scout Ernie Johnson signed him to a contract in 1939 (that August, he was married) but the team never told him where to go and he didn't get a contract from them the next year. [2] Confused, Larry called a Pacific Coast League umpire he knew, who gave him the address for Kenesaw Mountain Landis. Jansen sent a wire to Landis, who replied that he was a free agent. [3]

Jansen signed with the San Francisco Seals, who assigned him to their Salt Lake City Bees. He had a very good year, going 20-7 with a 2.19 ERA and led the Pioneer League in ERA (1.02 ahead of runner-up Red Zar) and winning percentage (.002 behind Zar). He was one win behind league leader Bill Caplinger.

Jansen fell to 11-14, 4.32 the next year with 222 hits allowed and only 46 strikeouts in 173 innings of work. That year, coach Larry Woodall taught him the slider. [6] Very few pitchers of the time used it and Jansen would later help bring it into prominence.

He was 21 at the time of Pearl Harbor and playing in the minor leagues. Though an asthmatic and married with two dependent children and eligible to be drafted, he was told by his draft board to retire from baseball and operate his farm in Oregon, which he did until the war ended and then returned to organized baseball. Having not used the slider much since he had learned it, he mastered it while playing semipro baseball twice a week in Oregon. [7]

San Francisco had a working agreement with the New York Giants and traded him after the 1946 season to New York for two players (as per Jansen in Baseball's Forgotten Heroes) or for cash (as per the main B-R page). The SABR BioProject says he was traded for Jack Brewer and Dick Lajeskie. Jansen said that he was to get a portion of the sale price and as he was traded, he got nothing financially out of the deal. [11]

Larry reported late to the Giants in 1947 due to a contract dispute. He arrived to find that he was one of the older pitchers in spring training with them. In his first spring training start, he was hit by a liner from Bob Feller when the sun reflected off a slew of white shirts worn by fans. The same game, Hank Edwards dislocated his shoulder, so two ambulances were sent out. Jansen needed an operation, which turned out well. The doctors told him he could have lost his eye if the ball had been a half-inch higher. [12]

Jansen only pitched about six innings of relief in spring training and did not do well. Larry made the team but was riding the pine early on. [13] Coach Hank Gowdy encouraged manager Mel Ott to use Jansen more. [14] Larry responded with a great year. He went 21-5, completing 20 of 30 starts, with a 3.16 ERA (129 ERA+). Jansen tied Ralph Branca, Warren Spahn and Johnny Sain for second in the NL in wins, one behind Ewell Blackwell; he led in winning percentage, was 9th in ERA (between Harry Taylor and Johnny Schmitz), 5th in WHIP (between Red Barrett and Branca), had the fewest walks per 9 innings (2.02, just edging out Schoolboy Rowe), was 5th in innings (248, between Sain and Kirby Higbe), 8th in strikeouts (104, between Higbe and Dutch Leonard), 4th in complete games, second in K/BB ratio (behind Blackwell), tied for first with teammate Dave Koslo with 23 home runs allowed, 4th in hits allowed (241), 9th in ERA+ (between Taylor and Jim Hearn) and 5th in pitching Wins Above Replacement (between Leonard and Red Munger). He finished 7th in voting for the 1947 National League Most Valuable Player (between Ralph Kiner and Pee Wee Reese) and second to Jackie Robinson in the 1947 Rookie of the Year Award voting, coming close to winning the first Rookie of the Year Award: he received 13 first-place votes to Jacke's 15.

The next year, Larry fell to 15-16, 3.84. He still tied for 8th in the 1949 NL in wins, was 9th in WHIP (between Brecheen and Hank Borowy), 4th in BB/9 (between Bill Werle and Leonard), third in innings (259 2/3, trailing Spahn and Ken Raffensberger) and strikeouts (113, after Spahn and Don Newcombe), tied Howie Pollet for 4th in complete games (17), 6th in K/BB ratio (between Pollet and Spahn) and tied for 8th in shutouts (3). He allowed the most gopher balls, 36, 9 more than runner-up Spahn, was 4th in hits surrendered (271, between Spahn and Vern Bickford), tied Leonard for fifth in losses and tied Herm Wehmeier for second in earned runs given up (Sain allowed more).

That off-season, the Giants acquired Alvin Dark and Eddie Stanky and gave away Willard Marshall and Sid Gordon to free up space for younger, faster outfielders. Jansen credited the new middle infield and outfield with lowering his ERA [15]; he had a 19-13, 3.01 record for the Giants in 1950 and his 136 ERA+ was the best of his career. He was third in the NL in ERA behind Sal Maglie and Blackwell, tied for 4th in victories, led in WHIP (over .1 ahead of runner-up Robin Roberts), 5th in fewest hits per 9 innings (between Spahn and Erv Palica), second to Raffensberger for fewest walks per 9 (just 1.8), 5th in strikeouts per 9 (between Palica and Wehmeier), tied for 10th in saves (3), 5th in innings pitched (275, between Sain and Newcombe), third with 161 batters struck out (after Spahn and Ewell Blackwell), tied with Roberts for 4th in complete games (21), part of a four-way tie for the league lead with five shutouts, 4th in homers allowed (31) and 4th in ERA+. His 2.93 K/BB ratio led the NL by a huge margin - Raffensberger was second at 2.17 and Roberts third at 1.90. He also hit his only career homer, off Al Brazle.

Jansen also was picked for his first All-Star team that year. In the 1950 All-Star Game, Burt Shotton told Jansen he would pitch the final three innings. Jansen threw hard and struck out a couple of batters; he thought he'd be lifted for a pinch-hitter as his spot was coming up, but Shotton let him bat. In the 8th, Larry fanned a couple more. Ralph Kiner tied the game with a 9th-inning home run. In the bottom of the 9th, Jansen fanned two more. He was left in to pitch the 10th - as he did not know how much longer he would be left in, he stopped throwing as hard as he had been. [16] Overall, Larry pitched five innings in the game, allowing only one hit and no walks to go with his six strikeouts before finally being replaced by Blackwell in the 12th inning. No pitcher since then (as of 2020) has pitched more than four innings in an All-Star Game.

Larry had another very good year for the Giants in 1951, the year the team surged in the last couple of months of the season to overtake the Brooklyn Dodgers. In the Shot Heard 'Round the World game (the third game of the three-game playoff against the Dodgers, on October 3rd), Jansen began warming up in the 1st inning but did not relieve Maglie until the 9th inning with a 4-1 deficit; Larry got the win thanks to Bobby Thomson's dramatic 9th-inning homer.[17] He made the All-Star team again that year but did not pitch in the 1951 All-Star Game. Overall, Jansen was 23-11 with a 3.04 ERA in his last great season. He tied Roe for fifth in the NL in ERA, tied Maglie for the win lead, was fourth in winning percentage (between Newcombe and Clyde King), third behind Raffensberger and Roberts in WHIP, second to Raffensberger in BB/9, 6th in K/9 (between Spahn and Blackwell), 5th in innings (278 2/3, between Dickson and Newcombe), 4th in strikeouts (145, between Maglie and Bob Rush), tied with Newcombe for 6th in complete games (18), tied for 7th in shutouts (3), 5th in homers allowed (26, between Maglie and Pollet), tied Maglie for 4th in hits given up (254), first again in K/BB ratio, second to Maglie in ERA+ and 4th in pitching Wins Above Replacement (5.5, between Maglie and Raffensberger).

In the 1951 World Series against the New York Yankees, Larry got rocked, going 0-2 with a 6.30 ERA but he got the chance to become the last pitcher Joe DiMaggio faced in his major league career; Joltin' Joe doubled off him. [18]

Larry was set to be the Portland manager in 1961 but former teammate Alvin Dark had become the manager of the San Francisco Giants and offered him the role of pitching coach, which he accepted. [21] He was the pitching coach for the Giants for 11 years (1961-1971), getting to work with Hall of Famers Gaylord Perry and Juan Marichal. He said that the best thing he did for Marichal was to leave him alone unless asked for a pointer, as he knew how to pitch.[22] The Giants reached the World Series for the first time since their move to San Francisco in 1962, but they lost to the Yankees in seven games.

After San Francisco let Jansen go after 1971, he was offered a job right away by the Chicago Cubs and held the pitching coach role there by his former manager with the Giants, Leo Durocher. He held the job for two years, in 1972 and 1973, when Durocher left halfway through the season. He retired at the end of the year, having over 20 years in the pension system to support his family. [23]