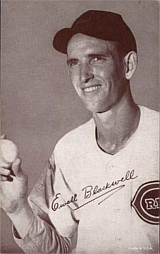 “He is the only pitcher I know who hides the ball four times and shows the ball to you four times... That is, you see it, the ball disappears, and then you see it again.” - Hal Newhouser, to Grantland Rice, January 24, 1950

Pitcher Ewell Blackwell earned the nickname "The Whip" for his sidearm delivery. He had his best season in 1947 with the Cincinnati Reds, going 22-8, pacing the senior circuit in victories, with a 2.47 ERA and a National League-high 193 strikeouts. That year, he won 16 consecutive games and pitched a no-hitter against the Boston Braves on June 18th. In his next start, he came close to matching Johnny Vander Meer's feat of back-to-back no-no's, holding the Brooklyn Dodgers hitless again until Eddie Stanky singled in the 9th inning. The Dodgers added another hit, but Blackwell ended up with a win in a two-hitter.

Blackwell was a six-time All-Star with the Reds and was the starting pitcher in the 1947 All-Star Game. He was traded to the New York Yankees in the heat of the 1952 pennant race, and started Game 5 of that year's World Series for the club, in spite of going 4-12 overall for the year, pitching five innings without figuring in the decision. He retired during the next season but made a brief comeback in 1955 with the Kansas City Athletics.

In 1960, Ewell was the 8th man to be inducted into the Cincinnati Reds Hall of Fame. He died of cancer at age 74.