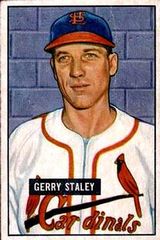 Gerry Staley pitched for fifteen years in the majors, making the All-Star team as both a starter (1952 and 1953) and as a reliever in both All-Star Games played in 1960. In 1949, while splitting his time between starts and relief, he was second in the National League in ERA. From 1949 to 1953, he won 19, 17, and 18 games respectively, primarily as a starter. In 1959 as a reliever, he led the American League in both Games Pitched and Games Finished.

He pitched in the 1959 World Series for the Chicago White Sox against the Los Angeles Dodgers. He appeared in 4 games, pitching 8 and 1/3 innings giving up 8 hits, 2 earned runs, no walks, and 3 strikeouts. He also had 1 save. He lost one game, giving up a game-winning home run in Game 4 to Gil Hodges in the bottom of the 8th inning.

Staley began his pro career in 1941, leading the Pioneer League with 261 IP and 22 wins. He was 20-10 in 1942 back in the Pioneer League, before missing the 1943-1945 seasons due to military service. He was with an Army evacuation hospital unit in the Pacific. He returned in 1946 to the Pacific Coast League before making his major league debut with the St. Louis Cardinals in 1947.

Because Staley split his time between being a starter and a reliever, winning 134 games and saving 61, the similarity scores method shows the most similar players as other pitchers who were both starters and relievers - people like Bob Stanley, Dick Drago, Dick Tidrow, and Firpo Marberry. Stanley, although he doesn't seem like the most similar, is ranked most similar to Staley by the method (even their last names are only one letter apart).

After his baseball days, Staley was superintendent of the Clark County Parks and Recreation Department for 17 years.

Always a pitcher, he was named to the Washington State Horseshoe Pitchers Hall of Fame.

He died of natural causes.