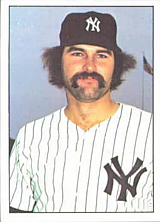 Dick "Dirt" Tidrow played thirteen seasons in the majors, mostly as a reliever with the New York Yankees and Chicago Cubs.

After being drafted three times (by the Washington Senators, San Francisco Giants, and Cincinnati Reds) and not signing, Tidrow was chosen by the Cleveland Indians in the secondary phase of the January 1967 amateur draft and began his pro career that summer. He reached the majors in 1972 with Cleveland, going 14-15 with a 2.77 ERA while winning The Sporting News Rookie Pitcher of the Year Award. He threw a two-hitter in an April 25, 1973 win against the Oakland A's: he walked 3 and struck out 3 while only allowing singles to Bert Campaneris and Ray Fosse. The opposing pitcher that day was future Hall of Famer and fellow starter-turned-reliever Rollie Fingers.

Traded to the Yankees early in the 1974 season as part of a seven-player deal, Tidrow was moved to the bullpen the next year and became the set-up man for closer Sparky Lyle. After pitching effectively in relief for several seasons, he returned to the rotation in 1978 following injuries to Catfish Hunter and Don Gullett and went 7-11. Early in 1979, Tidrow was dealt to the Cubs for Ray Burris, and he returned to a set-up role for Chicago closer Bruce Sutter. He got into 84 games to lead the National League in 1980. Prior to the 1983 season, he was traded across town to the Chicago White Sox, and he ended his career with the New York Mets in 1984.

Through 2019, Tidrow is one of only four players to play for both the Cubs and White Sox and both the Yankees and Mets. David Aardsma, Charley Smith and Lance Johnson are the others.

Since his playing career ended, Tidrow was a scout for the Yankees and has worked in the front office for the San Francisco Giants since 1994. Tidrow was a special assistant to the GM in 1996 and was farm director from 1997 to 2005. His current title is Senior Vice President of Player Personnel.