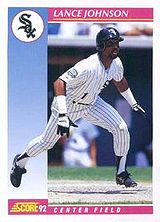 Lance Johnson played 14 years in the major leagues, leading the league five times in triples, and finishing in the top ten in stolen bases six times. His best year was 1996, when he hit .333 with 21 triples and 50 stolen bases for the New York Mets. However, he also got a lot of attention in 1993 when he hit .311, tenth in the American League, along with 14 triples and 35 stolen bases while frequently batting ninth in the batting order for the division-winning Chicago White Sox. He was seen as a "second lead-off batter" in the ninth spot for the White Sox, who usually had Tim Raines in the lead-off position.

Signed as the 6th round pick in the 1984 amateur draft by the St. Louis Cardinals and scout Marty Maier, Johnson didn't become a major league regular until 1990. While in the minors, he was expected to become a major league star some day, and was often in trade rumors. The Cardinals had Willie McGee playing center field, and so Johnson didn't figure in their plans. Johnson was finally traded after he won the American Association MVP award in 1987. He came to the Chicago White Sox, who primarily used Dave Gallagher in centerfield in 1988 and 1989. Gallagher, who had hit .303 as a rookie in 1988, lost his job to Johnson in 1990.

In 1993, Lance set the major league record for most regular-season plate appearances (579) by a player who did not hit a HR until the postseason. Second is Scott Podsednik, also a White Sox player, with 568 in 2005. Lance is also the only player to ever lead both the American League and National League in base hits when he hit 186 safeties for the White Sox in 1995, then in 1996 with the New York Mets, he led the Senior Circuit with 227 hits.

He attended the University of South Alabama, where another speedy outfielder, Juan Pierre, also went.