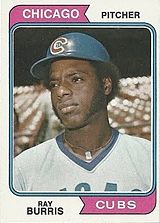 Ray Burris showed flashes of greatness during his career, yet never managed to win more than 15 games in a season, enjoying back to back 15 victory seasons with the Chicago Cubs in 1975 and 1976. He was plagued by the gopher ball, allowing 221 in his career. A good base runner, Burris was often used as a pinch runner. His career highlights came in the 1981 NLCS. Pitching for the Montreal Expos, he spun a shutout against the Los Angeles Dodgers in Game 2 of the 1981 NLCS, then in Game 5 gave up a single run in 8 innings against rookie phenom Fernando Valenzuela. He was replaced by a pinch-hitter and Steve Rogers gave up the infamous "Blue Monday" home run to Rick Monday that decided the series in the 9th inning. Burris intended to retire after the 1986 season and was serving as a pitching instructor for the Milwaukee Brewers in 1987 when he was pressed into action. He started two games and pitched in 10 in what he had intended to be his first year of retirement. In 1989, he played for the West Palm Beach Tropics of the Senior Professional Baseball Association. He went 8-2 in 15 starts for the club. As a big leaguer, he was 108-134 with a 4.17 ERA, 10 shutouts and 1,065 strikeouts in 480 games.

Burris was a major league coach with the Brewers in 1990 and 1991 and with the Texas Rangers in 1992, in addition to working in their front office and minor league systems. In 2013, he became pitching coach for the Lehigh Valley IronPigs, the Philadelphia Phillies' Triple A team.