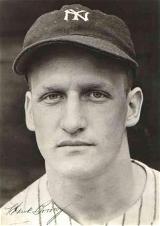 In 1945 Hank Borowy became the last pitcher with four decisions in a World Series. Pitching for the Chicago Cubs, he shut out the Detroit Tigers in Game 1 and lost Game 5, 8-4. Then he came on in relief in Game 6 to hold the Tigers scoreless over the final four innings in an 8-7, 12-inning Cubs victory forcing a seventh game. In that game, the bone-tired Borowy was given the start but was knocked out in the 1st inning in a 9-3 loss to finish at 2-2 in the series.

He had a record of 10-5 on July 27, 1945, when he was surprisingly placed on waivers by the Yankees and claimed by the Chicago Cubs. He was then 11-2 over the final two months to play in what was then the team's last National League pennant. With his overall record of 21-7, Hank became only the third pitcher in big league history to win 20 games in a season divided between the two leagues. Rick Sutcliffe (1984) and Bartolo Colon (2002) have done it since, with Colon being the only other pitcher to win at least 10 games in each league.

He was with the Cubs for three more seasons before moving to the Philadelphia Phillies, Pittsburgh Pirates, and back to the Detroit Tigers, where his 10-year career ended in 1951 with a record of 108-82. On August 18th that season, he became the only pitcher in major league history to give up 9 runs without retiring a single batter during a particularly dreadful relief stint in a 20-9 loss to the St. Louis Browns.

Borowy was a real estate broker in his hometown of Bloomfield for 30 years after leaving baseball, then retired to Sea Ranch Lakes, FL where he lived for several years. Returning to his home state, he died on August 23, 2004, in Brick, NJ at the age of 88.