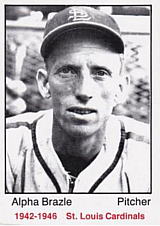 “Perhaps the best break of my career was to develop a sore arm. I used to pitch entirely overhanded and I liked to cut loose. I had pretty good speed... The injury forced me to pitch sidearm and I developed my sinker." - Al Brazle to The Sporting News, December 16, 1943

Before the 1936 season, the Boston Red Sox signed Al Brazle as an amateur free agent. He was assigned to the Southern Association Little Rock Travelers and spent the entire season with them, putting together a 7-8 record with a 5.92 ERA. Brazle was to spend some seven years in the minors, going 75-82 with a 4.92 ERA. During this stretch, Brazle was traded to the St. Louis Cardinals on September 5, 1940 in return for Mike Ryba. Brazle was 11-8 for the Sacramento Solons of the Pacific Coast League, with a league leading 1.69 ERA, when he was called up by the Cardinals in late July 1943. Al had an exceptional 1.53 ERA with St. Louis that year and was 8-2 during the regular season, but lost his only start against the New York Yankees in the World Series. The day after the series ended, Brazle was inducted into the United States Military. He was assigned to the Cavalry Replacement Training Center at Fort Riley, Kansas. He served in the European theater of operations through 1945 and was back with the Cardinals for the 1946 season.

He enjoyed nine post-war seasons with the Cardinals, winning 14 games in 1947 and 1949 and led the National League in saves in 1952 and 1953. In the 1946 World Series, against the Boston Red Sox, Brazle again failed to pick up a win, losing Game 5 in relief of Howie Pollet. The 40-year-old Brazle wound up his major league pitching chores in 1954, bringing his career totals to 97-64, 59 saves and a 3.31 ERA. Al was released by the Cardinals on October 19th. He signed with the American League Chicago White Sox in January 1955 but was released on April 6th, and his major league tour was at an end. Brazle ended his professional baseball career with the Pacific Coast League Sacramento Solons that season.