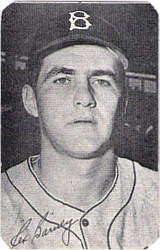 "Rex was a hot dog. When he first came up, he figured he was going to turn baseball inside out. We were staying at the Hotel St. George, and he must have gotten a fairly good bonus 'cause every time you looked around he was going to Abe Stark or Simmons the tailor to buy clothes. But he was really a hot dog. He would dress up real nice, and he'd go down to the lobby of the Hotel St. George -- that's when the St. George was nice, a classy little place -- and he'd stay down there for maybe an hour or two, and he'd go upstairs and get dressed again, change clothes and then he'd be down in the lobby again strutting around. He was in love with himself." - Carl Furillo, discussing Rex in Peter Golenbock's Bums: An Oral History of the Brooklyn Dodgers

"It was his lack of concentration. I was warming Rex up, getting ready for a game at Ebbets Field and about five minutes into the warm-up, he threw a ball about thirty feet over my head. When I retrieved the ball, I walked it back to Rex. I said 'You know, Rex, I can throw with you for an hour out here and never miss you by as much as you just missed me.' He took the ball. He wasn't paying any attention. He was watching the fans coming into the park. 'Look,' he said, 'isn't that Dave Snowden coming in with all those nuns?'" - Bobby Bragan, on catching Rex as quoted in Bums: An Oral History of the Brooklyn Dodgers

Rex Barney is one of the great "what might have been" stories in the history of baseball. He was blessed with such extraordinary speed on his fastball that for years after his playing days, a pitcher in the Brooklyn Dodgers organization who had a blazing fastball was referred to as possessing a "Rex Barney fastball". He had flashes of greatness, but incurable wildness derailed then ended his big league career at the age of 25.

Rex made his big league debut at 18, pitching briefly over the last few months of the 1943 season before joining the Army. He returned in 1946 and made 44 appearances over the next two seasons to middling results, although he did strike out Joe DiMaggio with the bases loaded in the 1947 World Series. He had his finest season the following year, 1948, winning 15 games and striking out 138, good for the second most in the National League behind Harry Brecheen. Having started slow that year with Leo Durocher at the helm, he kicked it into gear beginning July 4th and finished strong with Burt Shotton in charge. On September 9th, Rex hurled a no-hitter against the New York Giants, retiring Whitey Lockman, whom he regarded as one of his toughest outs, on a pop-up to Bruce Edwards to seal the deal. Ironically, the manager of the Giants at that time was now Durocher, who had taken the Giants job on his departure from the Dodgers.

Barney appeared to be on the verge of superstardom. And then, on the final day of the 1948 season, he broke his leg in two places sliding into second base against the Philadelphia Phillies. From then on, he felt he was never able to find the same motion and struggled even more to find the plate. Throughout his playing days, he had been plagued by a lack of control, and he ended his career with more walks than strikeouts. Bob Cooke wrote in the New York Herald Tribune that the hard-throwing Barney pitched "as if home plate were high and outside." Over his final two big league seasons, he walked 137 men in 174 1/3 innings. The Dodgers kept him in their minor league chain hoping he would find what he once had, but more struggles with control (53 walks in 17 innings with two affiliates) ran him out of baseball in 1952.

Rex later became the well-regarded public address announcer for the Baltimore Orioles, for whom he served from 1974 to 1997. He co-wrote two books, Rex Barney's Thank Youuuu for 50 Years of Baseball and Orioles Memories: 1969-1994. When he died on August 12, 1997, the Orioles played their game that night without any announcements in his honor.

Sources include: Bums: An Oral History of the Brooklyn Dodgers by Peter Golenbock