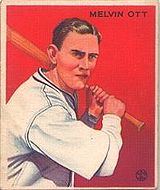 Inducted into Hall of Fame in 1951 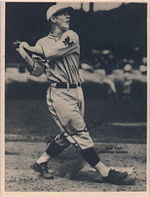 "I never knew a baseball player who was so universally loved. Why, even when he was playing against (us) he would be cheered and there are no more rabid fans than in Brooklyn." - Leo Durocher, about Mel Ott

Mel Ott, was a Hall of Fame right fielder who played 22 years in the big leagues, all with the New York Giants. Known as "Master Melvin", the diminutive 5' 9", 170 lb. star entered the majors at 17 years-old, and retired with 511 home runs, only the third player to reach the once lofty 500 Home Runs plateau. The nearest National Leagueer to him at the time was Rogers Hornsby, with just 301. In all he led the NL six times in home runs and five times in Adjusted OPS, retiring with a .304 career batting average.

Ott's first two managers with the New York Giants were John McGraw and Rogers Hornsby, both great hitters when they were players.

The most similar player is Frank Robinson.

Ott was not a very successful manager. He was the manager about whom Leo Durocher said "Nice guys finish last".

He was a broadcaster for the Detroit Tigers from 1956 to 1958. Quote: "I could watch the fans yelling and laughing and I'd think, 'What an ungrateful fellow a ballplayer would be who just didn't give everything he had every moment of every inning in every game.'" Mel Ott.

Ott was born in the New Orleans, LA area and also died there in an off-season car accident.

He was the first player in National League history to hit 300, 400 & 500 Home Runs. He holds the record for the most home runs in one ballpark, with 323 HR at the Polo Grounds. He also holds the record for career home runs in one city, with 348 in New York. Second is Babe Ruth who hit 344 in New York, including 259 at Yankee Stadium; no-one else had even 300 in the same city, until Barry Bonds hit exactly 300 in San Francisco.

Most home runs in one ballpark, 323 at Polo Grounds