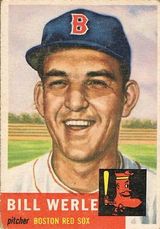 Bill Werle was a native of Oakland, CA, who began his career in pro ball in 1943 across the bay with the San Francisco Seals. Bill was with the Seals through 1948, winning 55 games and losing 48 during this stay in the Pacific Coast League, missing the 1945 season while serving with the United States Army during World War II. A left-hander out of the University of California, where he had a record of 25-2, he was called "Bugs" since he graduated in the field of entomology, the study of insects.

He once started both ends of a doubleheader for the PCL San Francisco team, hurling a shutout in the opener, with the nightcap ending in a curfew-suspended tie. After winning 17 games in 1948 he was sold to the Pittsburgh Pirates and won a career high 12 games as a rookie in 1949. After falling off to 8-16 in 1950, he was used primarily in relief in 1951, before being traded to the St. Louis Cardinals for right-hander Red Munger early in 1952.

Werle continued in pro baseball as a manager in the minor leagues for nine seasons (1961-1970) and was Masanori Murakami's manager with the class A Fresno Giants in 1964, right before Murakami became the first Japanese player in the major leagues. After his managing career was finished, Bill became a scout for the Baltimore Orioles for 20 years and then became a West Coast scout for the Cleveland Indians before retiring in San Mateo, CA, where he died in 2010.