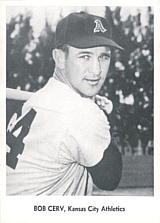 “Nobody knows this, but one of us has just been traded to Kansas City." - Casey Stengel, to Bob Cerv, late in the 1956 season

Bob Cerv, a strapping, hulking, part-time slugger and three-time member of the New York Yankees, spent most of his 12-year career with the Yanks and the Kansas City Athletics.

An above-average hitter with considerable power, he had trouble cracking the Yankees' gifted lineup. Upon being purchased by Kansas City, he finally got to play and put together some strong numbers. He had his best season in 1958, hitting .305/.371/.592 with 38 home runs and 104 RBI in a career best 141 games. He was named to the All-Star team and was 4th in the MVP voting. He was traded back to the Yankees in May 1960, and hit .357 in the World Series against the Pittsburgh Pittsburgh. He batted lead-off or third in the lineup. He was briefly an original member of the Los Angeles Angels in 1961, before being traded yet again to the Yankees, in a deal involving hard-throwing, hard-living relief ace Ryne Duren. The Yanks became World Series champs, but Cerv did not appear in postseason play. In 1962, his last season, he played briefly for the Yankees and the expansion Houston Colt .45s in their first season.

Cerv was portrayed by Chris Bauer in Billy Crystal's 2001 film 61*. He died in his native Nebraska at 91.