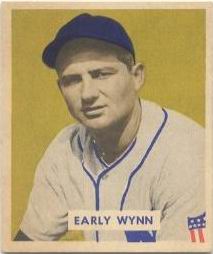 Pitcher Early Wynn was a five-time 20-game winner and won exactly 300 games in his major league career. He began with the Washington Senators, where he had only two really good years out of eight. Wynn entered the Army in August 1944 and missed the 1945 season. Joining the Cleveland Indians in 1949, he started winning with a heavy duty schedule as one of the "Big Three" of the Indians fine staff. In 1958, he moved on to the Chicago White Sox, and in 1959, he won the Cy Young Award at age 39. In 1963, he returned to the Indians to win his 300th game and finish his career. He was elected to the Baseball Hall of Fame on January 19, 1972 by the Baseball Writers Association of America.

Wynn was one of the few players to play in four different decades (his career spanned from 1939 to 1963). He was the leader in strikeouts in two seasons, but he also is one of the all-time leaders in walks issued. He was very tough, and it was said he would brush back his grandma if it would help him win a game. Another story was that instead of wasting four balls to intentionally walk a hitter, he considered just drilling him.

After his playing career ended, Wynn was pitching coach for the Indians and Minnesota Twins. He was a broadcaster for the expansion Toronto Blue Jays for five years , and in 1982 and 1983, he was a radio and television broadcaster for the Chicago White Sox.