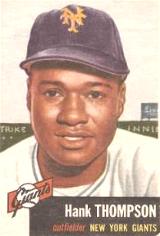 Hank Thompson was a Negro Leaguer who became one of the earliest black ballplayers in the Major Leagues, arriving as a 21 year-old with the 1947 St. Louis Browns. Over his nine-year career he was an above-average hitter and fielder, and appeared in the 1951 World Series and the 1954 World Series. He also was in trouble with the law a lot.

Thompson played several years with the Negro League Kansas City Monarchs before his career was interrupted by World War II. A gunner at the Battle of the Bulge, he was discharged a sergeant in 1946. In the winter before the 1947 season, Thompson barnstormed with Satchel Paige's All-Stars, who played against Bob Feller's All-Stars. Back with the Monarchs, he was signed in July of 1947 by the St. Louis Browns and became their first black player some three months after Jackie Robinson had broken the color barrier with the 1947 Dodgers, and just a few days after Larry Doby had become the first black player in the American League. He batted .256 in 27 games before being released in the spring of 1948.

Thompson played for the Monarchs again in 1948, finding his stroke and hitting .375. In the winter of 1948-49 New York Giants scout Alex Pompez saw Thompson and Monte Irvin playing in Cuba and signed them. The pair was sent to the Jersey City Giants in 1949.

Thompson slugged .565 in Jersey City in 68 games that year, then spent half the season in New York with the big league club, drawing walks and hitting for some power. Except for a 14 game stint with the Minneapolis Millers of the American Association in 1951 (where he slugged .774 in 14 games) he was a Major Leaguer from then on.

Thompson was a multi-talented player who could play a variety of positions. He was a second baseman a couple of years in the majors, was primarily a center fielder one year, and otherwise mostly played third base. As a hitter, he drew walks well, twice finishing in the top five in the league. He hit 20+ home runs three times, and was seventh in the league in slugging in 1953. He hit over .300 once and was among the triples leaders twice. He was twice among the leaders for hit-by-pitch and once for sacrifice flies.

In 1950 he set a major league record for the most double plays by a third baseman (since broken).

The most similar players based on the similarity scores method (through 2008) don't seem to be good comparisons because all (except Whitey Kurowski) have lower Adjusted OPS scores. Thompson has a higher Adjusted OPS than ten of the third basemen in the Hall of Fame, although his career was much shorter than most.

Thompson had many run-ins with the law. He was arrested a couple of times as a teenager (once acquitted). He killed a man in 1948, but it was called justifiable homicide. He also was accused of auto theft and striking a woman, but got off on both charges. He robbed a bar in 1961 but was given probation after the judge read letters from baseball executives. In 1963 he robbed a liquor store and was given ten years in prison, of which he served four years before being paroled.

He then worked as a playground director outside of Fresno, CA.

In September 1969 he had a heart seizure and died at age 43, on the thirteenth anniversary of his last game in the major leagues.