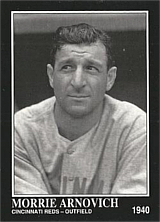 One of the most religious Jewish major leaguers, Morrie Arnovich kept kosher his whole life. A two-time All-Wisconsin basketball star in college, Morrie also was a superb billiards player, earning him his nickname of Snooker. He is the only major leaguer ever to come out of the University of Wisconsin-Superior in far northern Wisconsin.

Arnovich's professional baseball career began at age 22 with the Superior Blues, the champions of the newly revived Northern League in 1933. A shortstop that year, he hit .331 and slugged .495 with 17 steals. He was fifth in average and fourth in homers (14). His .918 fielding was best of any shortstop with 50 or more games and he made the unofficial All-Star team listed by the Spalding Guide. Returning to Superior in 1934, Arnovich hit .374 to take the Northern League batting title and his 21 homers tied for 5th in the loop. He hit 3 homers in one game that year. The Philadelphia Phillies purchased his contract in 1935 and assigned him to the Hazleton Mountaineers of the New York-Penn League. He hit .305 in 1935 and the next year hit .327 with 19 homers and 109 RBI. He tied for the league lead in homers and was one RBI off leading the league. He got a cup of coffee with the Phillies that season and hit .312 with a 104 OPS+ in late-season action. By this time, Arnovich had moved to the outfield and would not play any other position in the major leagues.

Arnovich was a decent hitter in the next three years with the Phillies. In 1939, he was the top hitter in the National League most of the season before fading late and finishing 5th at .324. He was sixth in OBP, made the NL All-Star team and had a 121 OPS+ in his best season. At the age of 29, Arnovich was sold to the Cincinnati Reds in 1940 and had a disappointing season, though he continued to hit for solid contact (.284, 86 OPS+); he failed to homer and his lack of power was not good for an outfielder. He made his only World Series appearance that season as a pinch hitter, as Jimmy Ripple started all seven World Series games in left field for the Reds. He was traded to the New York Giants in 1941 and had a 104 OPS+ in 85 games.

Arnovich tried to volunteer for the US Army but was turned down because he was missing a pair of molars. He got false teeth and volunteered again after Pearl Harbor - this time he was allowed in - and spent the next four years in the Army. He was initially at Fort Lewis, WA, where he played baseball. He was then sent overseas and, in 1944, was an Army postal clerk in New Guinea. In 1945, he went to the Philippines where he was with the Army Replacement Depot and played baseball in Manila. In December, he returned home for discharge as a T5 after 18 months overseas.

Out of condition and now 35 years old, Morrie played one game for New York and was sent to the Jersey City Giants, batting just 5 for 25 in 10 contests before being released in a wasted season. In 1947, Arnovich hit in the .370s in the Three-I League and Western Association, then batted .353 in limited time in the 1948 Southeastern League before retiring at age 37. Morrie coached basketball for a Catholic high school in Superior after retiring, then ran a jewelry store and a sporting goods store. In 1959, he died of a coronary occlusion shortly after his third wedding anniversary.