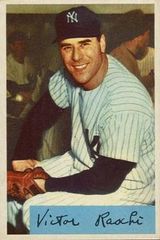 Pitcher Vic Raschi, who made his major league debut at age 27, won two-thirds of his decisions with a record of 132-66, including over 80 wins in a four-year span. He was in six World Series.

He debuted in the minors in 1941. He missed the 1943-1945 seasons due to military service during World War II. He started in the majors with the New York Yankees in 1946 and hit his peak in 1949-1951, winning 21 games each season. He went 5-3 in World Series play during his career, with the Yanks winning all six of the Series. He was unexpectedly traded to the St. Louis Cardinals during a contractual dispute with Yankee GM George Weiss.

He received as high as 10% of the vote in Hall of Fame voting.

Yankee pitchers Raschi, Allie Reynolds and Eddie Lopat were all roughly the same age while Whitey Ford was a decade younger.