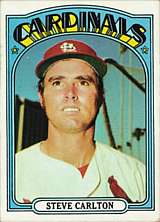 Inducted into Hall of Fame in 1994

"Carlton does not pitch to the hitter, he pitches through him. The batter hardly exists for Steve. He's playing an elevated game of catch." - Tim McCarver, Carlton's personal catcher

“To teach the world how to throw a slider." - Steve Carlton, answering Roy Firestone's question of “Why do you think you were put on this earth?” 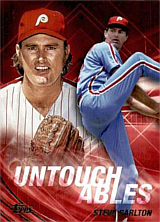 Steve Carlton was a big, imposing left-hander with a good fastball and an astonishing slider ("like drinking coffee with a fork," Willie Stargell supposedly said of trying to hit it). He was a four-time National League Cy Young Award winner, ten-time All-Star, and the last man to pitch over 300 innings in a season (304 in 1980). He won 329 games en route to the Hall of Fame, the #2 all-time southpaw and most career wins in baseball since Warren Spahn's 363.

Early career with the Cardinals[edit]

Good enough already as a 22-year-old to break into the St. Louis Cardinals' formidable World Series-bound rotation in 1967 after brief appearances in 1965 and 1966, Carlton went 14-9 with a 2.98 ERA in his first full season starting. He was a very similar 14-11 with a 2.99 ERA for the again Series-bound Cards in 1968, and made the first three of his All-Star Game appearances in his four remaining years with the Birds. After going 17-11 with a 2.17 ERA (good for second in the NL) in 1969, he faltered badly in 1970, slumping to 10-19. Letters from an unnamed correspondent presenting thoughtful analyses of his mental approach to the game began arriving that Carlton later credited with changing his outlook toward pitching.

Carlton rebounded strongly to win 20 games in 1971 before being traded to the Philadelphia Phillies after the season in return for the Phillies' ace, Rick Wise. The reason for his being moved? Money. After Carlton had the nerve to hold out for $55,000, or $10,000 more than Gussie Busch saw fit to paying him, and having held out in the past, the call was made to move him out of St. Louis. At the time, Carlton and Wise had put together somewhat similar career numbers. That would change in short order.

Carlton pitched on the same team as Hall of Famer Bob Gibson from 1965 to 1971. While Gibson in his prime was more dominant, Carlton showed flashes of the future greatness that would emerge in Philadelphia, squeaking past Gibson's 2.18 ERA with a 2.17 ERA in 1969 and topping Gibson 20 wins to 16 despite Gibson's lower ERA in 1971.

Though Wise had two reasonably good years with St. Louis before moving on to the Boston Red Sox, the Carlton/Wise trade is generally viewed as a disaster for the Cardinals. Where Wise was a one-time All-Star in his two seasons in St. Louis, Carlton went on to earn seven nods en route to a record four NL Cy Young Awards in Philadelphia. His rise from star to superstardom was immediate, posting one of the greatest pitching seasons ever in 1972. Sweeping the NL Triple Crown, he finished with 27 wins, 310 strikeouts, and a 1.97 ERA, and was the unanimous choice for the 1972 National League Cy Young Award despite pitching for a miserable Phillies outfit. His 27 victories were nearly one-half of Philadelphia's 59 for the season.

He faltered in 1973 but bounced back robustly from 1974 to 1976, then won the Cy Young Award again in 1977, and after two solid years cinched it twice more in 1980 and 1982. In between, despite overall superior numbers (in WAR, ERA, and winning percentage, among others), he saw the award go to rookie sensation Fernando Valenzuela of the Los Angeles Dodgers in the strike-shortened 1981 season.

Off the mound, Carlton lobbied in 1976 for the Phillies to sign his former Cardinal backstop, Tim McCarver, as his personal catcher. The pair lasted from 1976 through 1979 as a battery before Carlton resumed pitching to regular Philly catcher Bob Boone in 1980, after McCarver had retired. During the 1970s, Carlton adopted martial arts, running, and strength conditioning regimen that were ahead of their time, including working his hand to the bottom of a large canister of rice to strengthen his wrist for throwing his trademark slider. Despite unevenness season-to-season, Carlton was distinguished by his intense focus and willful isolation from the media circus superstardom brought. As part of it, he refused to talk to the media from 1977 until the press conference announcing his release in 1986.

In 1982, Carlton's 23 wins made him the only 20-game winner in baseball and the first pitcher ever to win four Cy Young Awards. A good-hitting pitcher, his batting average was 14 points higher that season than that of National League home run leader Dave Kingman. He was a key part of the Phillies' first-ever team to win the World Series, in 1980, and was still a mainstay of the starting rotation when the Phillies returned to the Fall Classic in 1983. He won two games in the 1980 Series against the Kansas City Royals, but lost his only start against the Baltimore Orioles in 1983 despite pitching well.

In the early 1980s, Carlton was locked in a spirited duel with Nolan Ryan for the lead on the all-time strikeout list. Entering the 1983 season, three pitchers were within 100 strikeouts of Walter Johnson's record of 3,508, a mark "The Big Train" had held since topping Cy Young's 2,803 in 1921. Closing in on the record, Nolan Ryan was second, 14 away, Gaylord Perry third, 56 away, and Carlton fourth, 74 back. Though Ryan was the first to pass Johnson, by the end of the year Carlton's huge 275 strikeout season surpassed first Perry, then Johnson, and finally Ryan, 3,709 to 3,677, to take the overall lead. Perry, who was in his final season, was never again a factor, though he too would surpass Johnson before retiring with 3,534 strikeouts.

A two-man race developed in 1984, as Carlton and Ryan swapped the top spot back and forth before Ryan finished just a pair of whiffs ahead, 3,874 to 3,872. An injury-plagued and ineffective 1985 season derailed Carlton, who never again overtook Ryan. His final lead followed a September 4, 1984 start, 3,857 to 3,854. Ryan fanned 8 the next day and never looked back, ultimately retiring with an insurmountable 5,714 strikeouts to Carlton's 4,136.

Decline, retirement, and the Hall of Fame[edit] 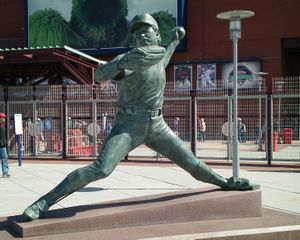 In 1985, Carlton had a 1-8 record but a respectable 3.33 ERA. He started 1986 4-8 with a bloated 6.18 ERA before being released by the Phillies on June 24th. Out of contention early due to the fast start of the New York Mets, the team he had done so much for did not even give him the courtesy of notching his 4,000th career strikeout in a Phillies uniform, releasing him just 18 shy. He signed with the San Francisco Giants and reached an even 4,000 before retiring.

But severe financial difficulties quickly changed his mind, forcing him to sign with the Chicago White Sox later that year. He pitched respectably, with a 4-3 record and a 3.69 ERA, but was ineffective in 1987 and 1988 for the Cleveland Indians and the Minnesota Twins. The Twins reached the World Series in 1987, but did not put Carlton on their postseason roster; instead they gave the ball to rookie Les Straker as their number 3 starter. He was released by the Twins on April 28, 1988, after pitching ineffectively in 4 games, then officially retired during spring training of 1989 when no team offered him a tryout. His #32 was retired by the Phillies in 1989, the same year he was inducted onto the Philadelphia Baseball Wall of Fame. In 2004, a statue of Steve was erected outside Citizens Bank Park.

Off the field, Carlton enjoyed hunting and fishing. In retirement, he has kept away from baseball, living in relative isolation in Colorado. He made an appearance on an episode of Married... With Children in 1992, as one of a series of athletes that humiliated Al Bundy (Ed O'Neill) in athletic feats during the filming of a shoe commercial.