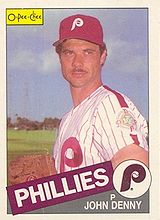 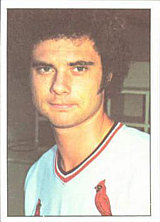 John Denny recorded 123 wins in 13 seasons in the majors and won the National League Cy Young Award in 1983.

Originally drafted by the St. Louis Cardinals in the 1970 amateur draft, Denny made his pro debut that year with the GCL Cardinals. He reached the big leagues as a September call-up for the Cards in 1974 and joined the club's rotation the following year, winning 10 games. He notched 11 victories in 1976 and led the National League with a 2.52 ERA.

After going 30-30 over the next three seasons, Denny was traded to the Cleveland Indians as part of a deal for Bobby Bonds. Late in the 1982 season, he was sent to the Philadelphia Phillies for three players. He responded by having his finest big league season for the Phillies in 1983, winning 19 games, posting a 2.37 ERA, and capturing the Cy Young Award as his team reached the World Series. He won the opener of the Fall Classic, but Philadelphia fell to the Baltimore Orioles in five games.

Denny spent two more summers in Philadelphia before being traded to the Cincinnati Reds following the 1985 season. He retired after winning 11 games in one year with the Reds in 1986.

Denny spent four years (2001 to 2004) as the rehab coach for the Arizona Diamondbacks.