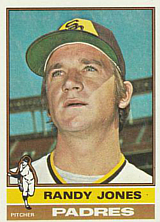 Randy Jones pitched a decade in the majors, mostly with the San Diego Padres, and was the 1976 National League Cy Young Award winner.

Drafted by the Padres in the fifth round of the 1972 amateur draft, Jones began his pro career that summer. After going 8-1 in 10 starts with the Alexandria Aces to start the 1973, he was called up to the majors in June, never to return to the minor leagues. The lefty went 7-6 with a 3.16 ERA in 20 games for San Diego that year. The next year, 1974, he was 8-22 (with a somewhat respectable 4.45 ERA) in 40 games, and he led the National League in losses.

After working with pitching coach Tom Morgan, Jones altered his mechanics and found success in 1975. He won 20 games that year, led the NL with a 2.24 ERA, and picked up the save in the 1975 All-Star Game. He finished second in Cy Young Award voting to Tom Seaver and was named the NL Comeback Player of the Year. His success continued into 1976, and he went 16-3 in the season's first half (an All-Star break win total that no one has equaled since). After starting and winning the 1976 All-Star Game, his numbers trailed off a bit, but he still finished the year with a 22-14 record, a 2.74 ERA, and 25 complete games. Never known for the speed of his pitches, he struck out just 93 despite leading the league with 315 innings pitched. Nonetheless, he captured the Cy Young Award.

Following back-to-back 20-win seasons, Jones had surgery after the 1976 campaign to repair a nerve injury and was never as successful. He won just 6 games in 1977 and, despite bouncing back somewhat with a 13-14 record and 2.88 ERA in 1978, never posted a winning record again. After the 1980 season, he was dealt to the New York Mets for a pair of prospects, Jose Moreno and John Pacella. Jones won 8 games over two seasons with the Mets before retiring.

Jones' lifetime record of 100-123 places him as the only Cy Young Award winner (among starting pitchers) with a lifetime losing record (as of 2010).

After retiring, Jones worked with young pitchers, among them, future Cy Young Award winner Barry Zito. His #35 has since been retired by the Padres and he was an inaugural inductee to the Padres Hall of Fame in 1999. He threw the ceremonial first pitch at the 2016 All-Star Game, played at Petco Park.