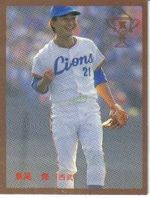 Osamu Higashio is a member of the Japanese Baseball Hall of Fame. He pitched 20 years for the Lions and later was their manager. He was twice named the Pacific League MVP.

Higashio was 10-11 with a save and a 3.28 ERA in 1982 and made his sixth All-Star team. He finished 9th in the league in ERA. After joining a horrible Lions club, he now was with the team (now the Seibu Lions) as they became a dynasty. In the 1982 Japan Series, he allowed 7 hits and 1 unearned run in 13 2/3 IP, defeating the Chunichi Dragons in games one and five and losing game three while saving game six, the finale. He was named Japan Series MVP for his efforts.

Higashio went 18-9 with two saves and a 2.92 ERA in 1983. He did not make the All-Star team but did lead his league in wins (tied with Kazuhiro Yamauchi), shutouts (tied for the lead with 3) and ERA. He won his first Diamond Glove Award, made the Best Nine as the circuit's top pitcher and took home the Pacific League MVP Award. In the 1983 Japan Series, he saved game one, lost game 3 to the Yomiuri Giants but came back to win game 7 in relief to give Seibu its second pennant. He had a 3.38 ERA for the tournament.

Higashio fell to 14-14 with a 3.32 ERA in 1984 and led the league in innings (241 1/3), losses for the fifth time, batters faced (986) and complete games (20) while also taking home his second straight Diamond Glove. he made his 7th All-Star team. He finished third in the loop in ERA behind Yutaro Imai and Hisashi Yamada. That year, he lost on Opening Day for the sixth straight time, a Pacific League record.

He fell to 12-11 with two saves and a 4.22 ERA in 1986. He made his 9th All-Star team and won his 4th straight Diamond Glove. That year, he was badly bruised when Dick Davis charged the mound and attacked him after Higashio plunked him on the elbow. Davis said his lone regret was that Higashio didn't get hurt enough to leave the game. He had a 1.77 ERA in 3 games in the 1986 Japan Series but got no decisions as Seibu beat the Hiroshima Carp for his third Japan Series title as a player.

In 1987, the old-timer was 15-9 with a 2.59 ERA. He made his 10th and final All-Star team. He won his fifth straight Diamond Glove and also was named the PL MVP for the second time. He was second in ERA behind Kimiyasu Kudoh, his young teammate who would also go on to a stellar career. He lost game one of the 1987 Japan Series to Yomiuri and then won game five as Seibu took the title. He had a 3.21 ERA for the Series.

Higashio was an announcer for Asahi TV after finishing his playing career. He became Seibu's manager in 1995, replacing Masahiko Mori. His club was 67-57-6 to finish third his first year, then went 62-64-4 in 1996, again placing third in the PL; it was his only managerial season under .500.

Higashio was voted into the Japanese Baseball Hall of Fame in 2010.

His daughter is Riko Higashio, a women's pro golfer.