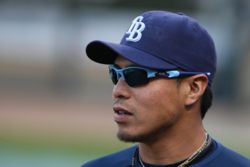 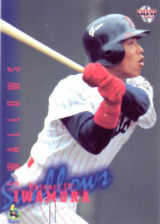 Akinori Iwamura was the free-swinging slugger who manned third base for the Tokyo Yakult Swallows before coming to the Tampa Bay Devil Rays as a second baseman in 2007. His brother Takashi Iwamura was briefly a minor league outfielder for the Kintetsu Buffaloes. In high school, Akinori hit cleanup for Japan's national high school team. He was picked in the second round of the 1996 NPB draft by Yakult and spent his first couple of years at ni-gun.

In 2003, Akinori produced at a disappointing .263/.328/.461 rate in 60 games and missed most of the year with a wrist ligament injury. He had worked out with a 45-ounce bat that off-season and this may have been a contributing factor. The 2004 campaign had him making his second All-Star team; he had a .300/.383/.583 line with 44 homers, 99 runs, 103 RBI and 173 strikeouts. He set a new Central League record for strikeouts and also had the highest total by a Japanese native in NPB history. It was 59 more K's than in any prior season but the added power production would seemingly be worth it. The #3 batter in the Yakult lineup was second to Toshihisa Nishi in runs in the CL, tied Tyrone Woods for third in RBI and was third in homers, only one behind Woods and Tuffy Rhodes in a dramatic battle for the home run crown. He won his 4th Gold Glove award and set a Yakult record for homers by a Japanese native. Kazuyoshi Tatsunami beat him out for the Best Nine.

In 2005, he cut his strikeout total by 27 but still led the league. His average increased but his power fell (he still smashed 30 homers) and his batting line read .319/.388/.555 with 102 RBI. He was sixth in the league in RBI, slugging, OPS, OBP and average and tied Fukudome for third with 304 total bases. He was an All-Star and Gold Glove winner. He again lost the Best Nine to a player from the pennant winners, this time Makoto Imaoka of Hanshin.

Akinori had previously asked Yakult to make him available through the posting system for teams from the US but they refused, citing his value to their club. In 2004, they claimed they might let him go after the 2005 season, but refused; the club president made a similar statement in January 2006 and this time, they did honor it. The Tampa Bay Devil Rays entered the high bid for Iwamura, $4.55 million. Iwamura expressed interest in switching back to red bats in the majors, as NPB had banned the use of them in 2005. Iwamura signed a 3-year, $7.7 million contract.

Iwamura hit .339 in April for the Devil Rays in 2007 and finishing second in AL Rookie of the Month voting behind Hideki Okajima. He was sidelined by a strained oblique. He only hit 7 home runs for the Devil Rays but batted .285/.359/.411 with 10 triples and 82 runs. He had a 105 OPS+ and finished second to Curtis Granderson in the American League in three-baggers.

Iwamura was Japan's starting second baseman and #9 hitter in the 2009 World Baseball Classic. He helped them win the title, hitting .286/.417/.357 with 7 walks and 7 runs in 9 games. He tied Ichiro Suzuki for the team lead in runs. He tied Suzuki and Keun-woo Jeong for 5th in the tourney in runs and tied Carlos Delgado, Hyun-soo Kim and Kosuke Fukudome for 4th in walks. He had a RBI triple off Roy Oswalt and then scored in the semifinals to run Japan's lead from 3-2 to 5-2 as they went on to eliminate Team USA. In the finals, he singled off Chang-yong Lim in the 10th and came around to score the last run in Japan's 5-3 victory.

Iwamura began 2009 strong, hitting .310/.377/.406 with 8 steals in 9 tries in 44 games and ranking among the AL leaders with 10 doubles. Unfortunately, he tore a ligament in his left knee during a collision with baserunner Chris Coghlan in late May, apparently ending his season. However, he came back in late August, after Ben Zobrist had filled in so well for him that he made the All-Star team. He finished with a .290/.355/.390 line in 69 contests for the year.

In the off-season, he was dealt to the Pittsburgh Pirates for reliever Jesse Chavez. He immediately became Pittsburgh's highest-paid player. Manager John Russell installed him as the leadoff hitter and second baseman at the start of the 2010 season, but injuries and poor play haunted him for the first couple of months: through May 25th, he was hitting just .163/.270/.234 while not clicking with double play mate Ronny Cedeno. He had an 0-for-34 stretch in May, the 16th-worst in-season slump for a position player in MLB since 1900; it had been six years since a position player had done worse, a 0-for-37 by Jose Cruz Jr.. No Pirate, pitcher or position player, had such a poor in-season streak since Steve Cooke went 34 straight hitless at-bats in 1997; to get a worse slump, you had to go to Bob Veale (36 straight outs) in 1969. Mark Smith had done worse over two seasons, 0 for 38 from the end of 1997 to the start of 1998. Overall, Iwamura hit only .182/.292/.267 in 54 games for the Pirates, a 54 OPS+ after ranging from 93 to 106 in his first three seasons in the majors. Pittsburgh then sent him down, handing the second base job to Neil Walker around the same time. Akinori rebounded a bit, batting .264/.404/.393 with 38 walks in 50 games for the Indianapolis Indians.

When Pittsburgh brought up eight September call-ups, they had to add Alex Presley, Brandon Moss, Brian Bass and Steven Jackson to the 40-man roster. Iwamura was promptly designated for assignment. The Oakland Athletics picked him up to replace the injured Kevin Kouzmanoff at third base. In his first game for Oakland, he went 0 for 2 with two walks. He scored the game's winning run on an error by Jarrod Dyson. He hit only .129 in 10 games for the A's, ending his major league career.

One of his hobbies is golf.