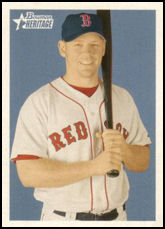 Outfielder Brandon Moss was selected by the Boston Red Sox in the 8th round of the 2002 amateur draft. He was signed by scout Rob English and began his career with the 2002 GCL Red Sox, hitting .204/.295/.292 only, with 40 strikeouts in 113 AB and no homers. In 2003, Brandon batted .237/.290/.430 for the Lowell Spinners. Brandon had played in a youth league all-star traveling team with Matt Capps and Brian McCann while growing up in Georgia.

Playing for the Augusta Green Jackets in 2004, he improved dramatically and was named South Atlantic League MVP. That year, he hit .339/.402/.515, stole 19 bases in 27 tries, drove in 101 runs, won the SAL batting title, made the league's All-Star team and was named the #20 prospect in the league by Baseball America.

Moss got a surprise start on Opening Day, 2008, played at the Tokyo Dome in Japan, because J.D. Drew had lower back tightness right before game time. He was the star of the show, driving in Boston's first two runs in the 6th against Joe Blanton of the Athletics. In the 9th, he came up with a 4-3 deficit and one out and homered off Huston Street to tie the score. Moss was the fifth Major Leaguer to hit his first home run outside of the USA or Canada (three had done so in Puerto Rico, one in Mexico). He was the first Red Sox player since Ben Steiner in 1945 to hit his first career homer on Opening Day. On July 31st, Moss was traded to the Pittsburgh Pirates along with Craig Hansen in a three-team trade that sent Jason Bay to the Red Sox, Moss, Hansen, Andy LaRoche and Bryan Morris to the Pirates, and Manny Ramirez to the Los Angeles Dodgers. He had hit .295 in 34 games with the Red Sox, getting only 78 at-bats, then fell to .222 in 45 games for the Bucs, for an OPS+ of only 88.

After playing the balance of the 2008 season with the Pirates, he started most of the year in 2009 but continued to play poorly, pressing mightily. In 133 games, he hit only .236, with 7 homers and 41 RBI, very poor numbers for a hitter expected to be a big presence in the middle of the line-up. He was removed from the 40-man roster in spring training of 2012 and spent the season in AAA, where he struggled again until reverting to his minor league batting stance. His power and average returned, earning him a September call-up and restoration to the 40-man roster. While with the Pirates though, he again struggled hitting just .154 in limited playing time, primarily as a pinch hitter. Granted free agency after the season, he signed with the Philadelphia Phillies organization and began the 2011 season in AAA with the Lehigh Valley IronPigs. He hit .275 in 124 games, with 31 doubles, 23 homers and 80 RBI, showing a decent batting stroke again. He only played 5 games with the Phillies that season, going 0 for 6. At that point, he explained, he almost quit the game and considered becoming a firefighter. However, his wife Allison convinced him to give baseball one more try, and that was when he had his break-out season.

Moss was the hero of the A's 10-8 win over the Los Angeles Angels of Anaheim in the longest-lasting game in Oakland history on April 29, 2013. He hit a pair of home runs that day, the second of which came with two outs in the bottom of the 19th inning with teammate Jed Lowrie on first base. The walk-off shot against Barry Enright put an end to six hours and 32 minutes of play. He played 145 games for Oakland that year, hitting .256 with a career-high 30 homers and 87 RBIs, also scoring 74 runs, while playing first base but also right field. The A's repeated as AL West champions, but Brandon was once again stymied in the postseason, being limited to a single and a solo homer in 18 at-bats as the A's were once again eliminated by the Tigers in the ALDS. In 2014, he was named to the All-Star team for the first time after a great first half in which he hit .268 with 21 homers and 66 RBIS. However, he had an awful second half, mirroring that of the whole team which almost failed to make the postseason after being the best team in the majors in the season's first half: in 58 games, he hit only .173 with 4 homers and 15 RBIs, and was benched often given his lack of production. He ended up hitting .234 with 25 homers and 81 RBIs, disappointing numbers given his hot start. He did start the American League Wild Card Game at DH and batting clean-up against the Kansas City Royals and immediately made fans forget his difficult second half when he homered off James Shields with two out and Coco Crisp on first base in the 1st, for an early 2-0 lead. In the 6th, he was at it again, this time greeting reliever Yordano Ventura with a three-run shot with nobody out. That put the A's ahead again, 5-3, and they added a couple more runs before the inning was over for what seemed a comfortable 7-3 lead. His 5 RBIs were a team record for a postseason game, and the A's eventually lost the wild game, 9-8, in 12 innings, making his good work for naught.

The A's decided to re-tool after their early postseason exit, and Moss was one of the players they traded in order to acquire prospects. On December 8, 2014, he was sent to the Cleveland Indians for minor league infielder Joey Wendle. He had a great game for the Indians on April 24th, when he hit two homers and drove in 7 runs in a 13-1 rout of the Detroit Tigers. He had been hitting .162 with 2 RBIs entering the game. He was more productive over the next few months, although his batting average was only .217 in 94 games: at least he was hitting for power, with 17 doubles and 15 homers while driving in 50 runs while playing mostly in right field. However, the Indians realized they were out of the playoff race when the trading deadline came along, and the sent Moss to the St. Louis Cardinals on July 30th in return for P Rob Kaminsky. He played 51 games for the Cardinals, hitting .250 with 4 homers and 8 RBIs. In the postseason, he went 1 for 3, getting the start at first base in Game 2 of the Cards' Division Series loss against the Chicago Cubs. he also spent all of 2016 with St. Louis, playing 128 games and hitting .225, but with 28 homers and 67 RBIs. He split his time between first base and the outfield, playing both corner outfield slots.

On January 29, 2017, it was reported that Moss had signed a two-year free agent deal with the Kansas City Royals for $12 million. He was seen as a replacement for Kendrys Morales, who had departed via free agency earlier that off-season. He played 118 games for the Royals that season, hitting just .207, but with 22 homers and 50 RBIs as the team's main DH. After the season, the Royals decided to move in a different direction following the departure of some key players through free agency. As a result, on January 29th, they traded Moss, along with P Ryan Buchter to Oakland for Jesse Hahn and Heath Fillmyer in a move designed to free up some salary money to re-sign one of the team's former pillars, most likely 1B Eric Hosmer. However, Moss was unable to convince Oakland to keep him on board, as two weeks int spring training, he was designated for assignment on March 4th in order to clear a spot on the 40-man roster for pitching prospect Jairo Labourt. He was then released two days later when the A's were unable to find anyone interested in taking him in a trade.