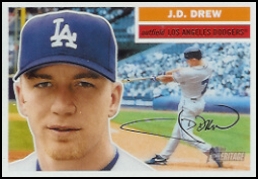 J.D. Drew was the first pick (#2 overall) of the Philadelphia Phillies in the 1997 amateur draft, but did not sign. That same year, his brother, Tim Drew, was also selected in the first round, by the Cleveland Indians. In 2004, another brother Stephen Drew was selected in the first round by the Arizona Diamondbacks. J.D. had a storied college career at Florida State University, where he had college baseball's first 30-30 season and won the Golden Spikes Award as the top amateur baseball player in the United States.

Drew was represented by agent Scott Boras who played hard-ball tactics with the Phillies after they drafted him. For example, Boras once instructed Drew's mother to attempt to return a Fed-Ex package from the Phillies that she had signed for and accepted. Drew and Boras challenged baseball to make Drew a free agent. A similar strategy worked when in 1996 when several drafted players, including Travis Lee and John Patterson, were declared free agents because contracts were not offered to them within 15 days of the end of the draft. The tactic failed this time, and Drew signed with the St. Paul Saints of the independent Northern League in order to be able to play while negotiations continued. Drew re-entered the draft in 1998 and he was chosen by the St. Louis Cardinals with the 5th overall pick. This time, negotiations went smoothly - the Cardinals knew what Drew's demands were - and he was playing in the National League by September of that year. The whole protracted episode was extremely bitter and Drew (and Boras) were both despised by Philadelphia fans for the longest time for what is considered their nefarious dealings.

Drew's career was hampered by injuries and he was unable to fulfill comparisons to Mickey Mantle. Still, he was a productive player when healthy, but never had the type of monster season that everyone expected. In 2004, Drew had a 22-game hitting streak - the fifth longest in the history of the Atlanta Braves. He hit .384 during that time, which came during what was Drew's best Major League season.