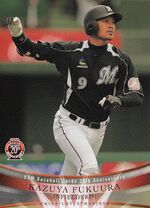 Nippon Pro Baseball's answer to Mark Grace, a contact-hitting first baseman at a position dominated by long-ball hitters. Fukuura even has a similar build to Grace. A career .302 hitter as of 2005, Kazuya Fukuura has topped .300 every season since 2001. The Chiba Lotte Marines 1B only topped 20 HR once, in 2003. That year he also led the Pacific League with 50 doubles; his 40 had placed him 3rd in 2002 and he again led the league in 2004 with 42. His best season as a contact hitter was 2001 when he batted .346, to take the first Pacific League batting title by someone other than Ichiro Suzuki since 1993. Of course, Ichiro was stateside or Fukuura might not have led the PL that year. He won a Gold Glove in 2003 and another in '05 but has yet to make a Best Nine due to the presence of Michihiro Ogasawara, Alex Cabrera and Nobuhiko Matsunaka.