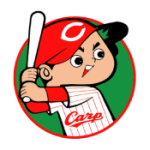 Hiroshima Toyo Carp was founded in 1967 as the Hiroshima Carp, changing its name after 1967.

Easily mistaken for the Cincinnati Reds, the Carp also have a red cap with a white C and a grey uniform with red lettering. The Carp were the worst team in the first 25 years of the Central League, finishing in the second division every year from 1950 through 1974 except for one third-place finish. After three straight last-place finishes, they won the pennant in 1975, starting a run as perhaps the top team in the league over the next decade. Lately they've slipped back downwards, again becoming a second-division squad. Not boasting the financial power of some of the other Central teams, their peak came after the draft was instituted and before free agency took effect.

The Carp spent more effort on developing Latino players in the 1990s than did other Japanese teams. They established a baseball academy in the Dominican Republic that produced Timo Perez, Alfonso Soriano and Robinson Checo - only Checo produced well for Hiroshima before going to the US. The Carp also placed a team in the Dominican Summer League for a few years, the only non-MLB team to have a farm club there. 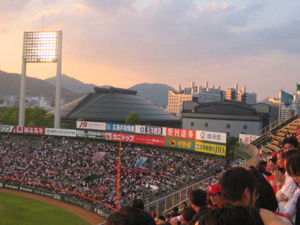