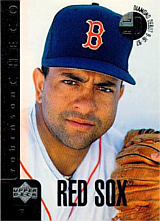 Robinson Checo was signed by the California Angels in May 1989 and played on the club's Dominican Summer League team. He was released before the 1990 season and headed to the Hiroshima Carp's Dominican Academy. In 1992, he went to Japan with the Carp's minor league club and continued his international travels in 1993 with a stopover in the Chinese Professional Baseball League. There, he spent the whole 1994 season dealing for the China Times Eagles before returning to Japan in 1995.

Checo quickly established himself as Hiroshima's ace. He went 15-8 with a 2.74 ERA and 166 strikeouts in 193 2/3 innings. He allowed the most homers in the Central League (25) and also walked the most batters (98) but was third in wins and ERA and second in strikeouts. He also became the first foreign pitcher ever to toss a shutout in his first Japanese appearance (April 12th against the Hanshin Tigers). He subsequently barely missed a no-hitter later against Hanshin when light-hitting infielder Teruyoshi Kuji doubled with two gone in the 9th to spoil it (May 18, 1995). Checo became the center of scandal in the offseason. He demanded a release so he could play in Major League Baseball but Hiroshima officials turned him down. With agent Don Nomura, he went to arbitration to try to get a big raise but this led to legal and public relation problems. He finally settled with the club, offered a public apology and paid the Carp a small fee. He only pitched in 9 games for Hiroshima in 1996, going 4-1 but with a 4.80 ERA. He then "retired", just as Hideo Nomo had done two years earlier.

Dan Duquette signed Checo to join the Boston Red Sox later that year. During his short career with Boston, he was sometimes referred to as "The Dominican Mystery Man" because no one seemed to know his status or whereabouts. He pitched for four teams in the Boston chain in 1997, going 7-8 and suffering an arm injury. He made 5 appearances with the big club in September, with a 3.38 ERA in 13 1/3 innings. He was 7-5 with four different clubs again in 1998, spending most of the season with the AAA Pawtucket Red Sox, but also appeared in the Rookie-class Gulf Coast League, the Florida State League and the majors (2 starts, 0-2, 9.39 ERA, 7 2/3 innings). Having seen enough, Checo was cut loose. He signed with and was subsequently released by the Detroit Tigers then caught on with the Los Angeles Dodgers in 1999, going 5-8 in AAA before getting toasted, and not nicely toasted, in his final major league appearances (9 games, 2-2, 10.34 ERA in 15 2/3 innings). In 2000, Checo was 8-3 with a 3.63 for the Albuquerque Dukes but did not get another shot at extending his career. Overall, Checo pitched for at least 13 teams in four countries in a 12-year career.