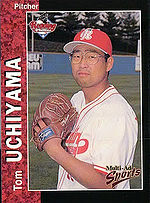 Pitcher Tomoyuki Uchiyama played in Nippon Pro Baseball from 1992 to 1997 and for the American Reading Phillies in 1998.

Prior to playing professionally, Uchiyama went 10-16 in college. He was drafted in the fifth round of the 1990 draft by the Seibu Lions and played his first season with them two years later.

In 1992, Uchiyama went 0-1 with a 3.00 ERA in 11 relief appearances. The following season, he went 3-4 with a 3.01 ERA and .207 opponent average in 31 games (six starts). He allowed one run in 2 2/3 IP in the 1993 Japan Series, which Seibu lost to the Yakult Swallows. During the 1993 offseason, he was traded with Koji Akiyama and Tomio Watanabe for Makoto Sasaki, Katsuyoshi Murata and Takehiro Hashimoto of the Daiei Hawks, with whom he spent the rest of his NPB career.

He moved to the United States for the 1998 season, playing for the Reading Phillies in the Philadelphia Phillies organization. He made 43 appearances (five starts) and went 5-6 with a save and a 3.94 ERA.