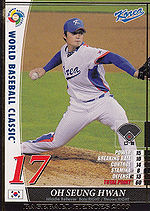 Seung-hwan Oh holds the Korea Baseball Organization record for saves in a year and career. He is an Olympic Gold Medalist and two-time Korean Series MVP.

Oh was a superstar hurler in college. In 2004, he won a couple of awards for his performance as an amateur. He appeared in the 2004 World University Championship.

Seung-hwan debuted professionally in 2005 with the Samsung Lions. He debuted on April 3rd against the Lotte Giants, got his first save 24 days later and went on to a fine year, making the All-Star team. He went 10-1 with 16 saves and allowed a minuscule 46 hits in 99 IP. He walked 20, fanned 115 and had a 1.15 ERA. As he had 11 holds, he had what in South Korean baseball circles is called a "triple double" (holds, wins and saves). He led the KBO in winning percentage, was fifth in strikeouts and sixth in saves. In the 2005 Korean Series, Oh pitched 7 scoreless innings, striking out 11. Oh won both the Korean Series Most Valuable Player Award and Korea Baseball Organization Rookie of the Year award. He almost won the Korea Baseball Organization Most Valuable Player Award too, finishing second in voting to Min-han Sohn.

Seung-hwan was on the South Korean team for the 2006 World Baseball Classic. He pitched three hitless, walkless innings in four games, marred only by a hit batsman. He saved one game and struck out three and tied Francisco Rodríguez for the most innings without a hit or walk in the tourney.

In his sophomore season, Oh went on to even bigger things. He went 4-3 with 47 saves, breaking the Asian baseball record held by Hitoki Iwase (Nippon Pro Baseball with 46); the old KBO record had been 42. He made another All-Star appearance. His ERA was 1.59 and he walked only 12 (one intentional) in 79 1/3 innings while striking out 109 (9th in the KBO). He gave up just 43 hits and one home run. He finished third in MVP voting behind Hyun-jin Ryu and Dae-ho Lee. He won Bronze in the 2006 Asian Games.

Oh had a win and a save in the 2008 Olympics despite only facing four batters in helping South Korea win Gold. He got a double play fly out from the only batter he faced in a win over China and retired all three hitters he faced in a save against Cuba.

In the 2009 World Baseball Classic, Oh allowed 3 hits and 2 runs in one inning of work. All the trouble came in one game against Japan (which beat South Korea for the title); Oh entered with a 2-2 tie in the 8th and gave up hits to Norichika Aoki and Atsunori Inaba. Kwang-hyun Kim relieved and let both inherited runners score, handing Oh the loss.

In 2011, he was back to his old form, going 1-0 with 47 saves, a 0.63 ERA, 27 hits (2 homers), only four runs, 11 walks and 76 whiffs in 57 innings. He tied his own Asian and KBO records for saves. He set a world record for fewest games to 200 saves, with 333, topping Jonathan Papelbon's mark of 359 in MLB. He saved the first two games of the 2011 Korean Series. In Game 2, he entered in the 8th with a 2-1 lead, two on and none out in a more old-fashioned closer role than the traditional 9th. He got the first two outs. Dong-soo Choi singled to center but runner Jung Choi was thrown out at home. Oh then had a 1-2-3 9th for his fifth save ever in a Korean Series, a new record. He also saved Game 5, winning Korean Series MVP again. He became the 4th two-time MVP, following Yong-soo Kim (1990 and 1994), Jong-beom Lee (1993 and 1997) and Min-tae Chung (1998 and 2003). He was also named as one of four finalists for the KBO MVP, along with teammate Hyung-woo Choi (the home run, RBI and slugging leader), fellow pitcher Seok-min Yoon (the pitching Triple Crown winner) and defending MVP Dae-ho Lee (the batting average and OBP leader). Oh originally said he wanted to be the first full-time closer to be named MVP (Dae-sung Koo won while splitting time between closer and starter 15 years prior), but then withdrew his name from candidacy, throwing his support behind teammate Hyung-woo Choi. Oh became the first player ever to withdraw from the list of KBO MVP finalists. Despite his withdrawal, he still finished second with 19 of 91 votes, well back of Yoon (62) but ahead of both Choi (8) and Lee (2).

Oh was 2-1 with 37 saves and a 1.97 ERA in 2012, leading the loop in saves by two over Scott Proctor. He saved two games in the 2012 Korean Series, won by Samsung. In the 2013 World Baseball Classic, he was untouchable, striking out six of the eight batters he faced and allowing no one to reach. He struck out Jonathan Schoop and Roger Bernadina to end an upset loss to the Dutch national team. Versus Australia, he fanned Josh Davies, retired David Kandilas on a grounder and K'd Corey Adamson. He replaced Won-sam Jang with a 3-2 lead over Taiwan, one on and none out in the 9th and promptly struck out Yen-Wen Kuo and Dai-Kang Yang before Che-Hsuan Lin popped up, giving Oh the save.

Oh became a free agent after 2013 and was widely expected to play in the US, with rumors that the New York Yankees were among the suitors. Instead, he wound up signing with Japan's Hanshin Tigers for 2014. In his Nippon Pro Baseball debut, he relieved Shinobu Fukuhara in the bottom of the 9th with a 5-3 lead over the Yomiuri Giants to try to preserve. He retired Shinnosuke Abe, allowed a hit to José López. He got pinch-hitter Kenji Yano on a grounder and Itaru Hashimoto on a fly for his first save in Japan. He was excellent his first year in Japan, going 2-4 with 39 saves and a 1.76 ERA, fanning 81 in 66 2/3 IP and allowing a 0.82 WHIP. He tied Scott Mathieson for 5th in the Central League in games pitched, led in saves (9 more than #2 Mathieson), was named MVP of the Climax Series playoffs and finished 4th in voting for the 2014 Central League Most Valuable Player Award (behind Tomoyuki Sugano, Tetsuto Yamada and Randy Messenger). He went 1-2-3 to wrap up a 2014 Japan Series game 1 win over the Softbank Hawks but served up a 3-run game-losing homer to Akira Nakamura in the bottom of the 10th of game 4.

Spending the 2015 season in Japan as well, he put together another fine year. In 2015 NPB All-Star Game 2, he pitched the 9th inning of a 8-3 CL win over the Pacific League. He relieved Tony Barnette and retired all three batters on flies to left: Tomoya Mori, Ikuhiro Kiyota and Kenta Imamiya all hit them to Yoshihiro Maru. For the year, Oh was 2-3 with 41 saves and a 2.73 ERA, though his K rate was down and his WHIP was up. He tied Mathieson and Katsuki Matayoshi for 5th in games pitched (63) in the Central League and tied Tony Barnette for the save lead. He and Barnette tied the NPB record for saves by a foreigner, even with Marc Kroon's 2008 total. He became the first player to 350 saves between NPB and KBO.

He became a free agent again, once again prompting rumors that he would sign with a major league team. These rumors were confirmed on January 11, 2016 when he signed a one-year deal with the St. Louis Cardinals, coupled with an option for a second year. Before he could leave Asia for good, he ran into a bit of trouble at home, being fined that same month an amount of 10 million won ($8,300) for heavy betting in a Macau casino, running afoul of his country's strict gambling laws. He and a former teammate, Chang-yong Lim were also handed a six month suspension by the KBO for their illegal activities, although this was of little consequence for Oh.

He made his debut for the Cardinals on Opening Day in 2016, April 3rd. Facing the Pittsburgh Pirates, he entered the game in the bottom of the 7th with his team down, 3-0. He walked the first batter he faced, pinch-hitter Matt Joyce, and issued a second walk after one out, but struck out David Freese and Starling Marte back-to-back to escape the inning without giving up a run. It was the start of a very solid rookie season which earned him a spot as the relief pitcher on the 2016 Topps All-Star Rookie Team. In 76 appearances for the Cardinals, he went 6-3, 1.92, with 103 strikeouts in 79 2/3 innings. He eventually worked his way into the closer slot and saved a total of 19 games. He then began 2017 as the Cards' closer, but after compiling 15 saves by mid-June, began to slow down and eventually lost the job. He ended up making 62 appearances with a record of 1-6, an ERA of 4.10 and 20 saves. His strikeout rate fell considerably, to 54 in 59 1/3 innings. He became a free agent after the season and the Cardinals did not make a serious effort to retain him.

On February 6, 2018, he signed a one-year contract with the Texas Rangers. However, the deal was struck down a few days later when a physical exam raised some unforeseen issues. He then had to wait until February 26th to find another team, this time the Toronto Blue Jays. They did not have the same concerns over his health, and in fact decided to have veteran OF Ezequiel Carrera designated for assignment to make room for Oh on their 40-man roster. However, his arrival in spring training was delayed by a couple of weeks by visa issues.