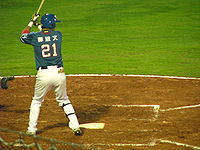 Yen-Wen Kuo made his professional debut in 2008.

Kuo played for Taiwan in the 2006 World Junior Championship, hitting .387. He signed with the Cincinnati Reds the next year, shortly before his 19th birthday. Kuo made his debut for Taiwan's senior national team in the 2008 Final Olympic Qualification Tournament and went 1 for 7 with an error as the backup 2B behind fellow US minor leaguer Chih-Hsien Chiang. Kuo made his Organized Baseball debut in 2008 with the GCL Reds; he began his career with a bang on June 20, going 3 for 5 with a double, walk, 3 runs and 2 RBI against the GCL Red Sox.

In the 2009 World Baseball Classic, he was 1 for 3 with a single off Seung-ho Lee. That year, he hit .256/.313/.330 as a utility infielder between three Reds affiliates, mostly with the Billings Mustangs.

Cincinnati released Kuo late in spring training in 2010. The La New Bears made him the second pick in the 2010 CPBL draft, after Yung-Chi Chen. He made a big splash, going 3 for 5 with a double in his debut on April 2 and collecting 7 hits and 13 total bases in his first 15 at-bats.