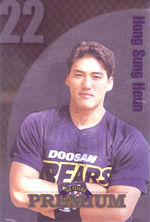 Sung-heon Hong has been a top catcher in South Korea for a decade. He has been on the Korean national team for a few major events, including the 2000 Olympics, when they won Bronze.

Hong played for South Korea in the 1998 Baseball World Cup, hitting .229/.286/.343 with 7 RBI in 10 games. He had four passed balls but threw out 4 of 10 attempted base-stealers. He was 1 for 3 as the clean-up batter against Jose Contreras in the Gold Medal game; South Korea settled for Silver. Among those who hit behind Hong was Hee-seop Choi. In the 1998 Asian Games, Hong helped Korea win Gold.

After 10 years with the Bears, Hong signed a 279 million won contract with the Lotte Giants for 2009.

This biographical article is missing the person's: birth place
Retrieved from "https://www.baseball-reference.com/bpv/index.php?title=Sung-heon_Hong&oldid=1123426"
Categories: