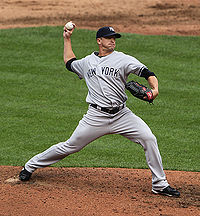 Scott Proctor was drafted by the Los Angeles Dodgers in the 5th round of the 1998 amateur draft. He was signed by scout Bill Pleis and made his pro debut that summer.

At the trading deadline in 2003, Proctor was traded by the Dodgers with Bubba Crosby to the New York Yankees in return for Robin Ventura. That season, while with the AAA Columbus Clippers, Proctor went 2-0 and recorded a 0.84 WHIP. In 2006, he pitched 102 1/3 innings in relief for New York. While this was a lot for the time, it did not draw particular notice; it was however the last time a major league reliever has pitched over 100 innings, something that used to be very common only a decade earlier. At the trading deadline in 2007, he was traded by the Yankees back to the Dodgers for Wilson Betemit.

He underwent Tommy John surgery in 2009 and last pitched in the majors in 2011, when he played 31 games for the Atlanta Braves and another 9 with the Yankees. In 2012, he pitched in the Korea Baseball Organization for the Doosan Bears, saving 35 games with a 1.79 ERA. He was second in the 2012 KBO in saves, two behind leader Seung-hwan Oh. He went to spring training with the San Francisco Giants in 2013 and when he failed to make the team, was sold to the Baltimore Orioles who sent him down to the AAA Norfolk Tides to start the season. He pitched 6 times for Norfolk, with an ERA of 8.59, then decided to call it a career.