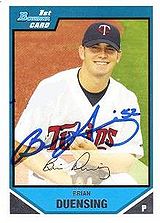 Brian Duensing is a pitcher who spent his first seven major league seasons with the Minnesota Twins. He started one of the most prominent wins in Team USA history in 2007.

Duensing was a second-team All-Nebraska player as a senior and a junior in high school, hitting .429 and .434 respectively. He was 16-3 in his last two years in American Legion Baseball. As a senior, he was 9-1 with a 0.74 ERA in American Legion play and hit .522, the best mark in the state. He was undrafted out of high school.

Duensing was 6-2 with a 4.73 ERA as a freshman for the University of Nebraska in 2002, one of two freshman pitchers used by a team that made it to the College World Series. Duensing helped them get there, throwing 11 2/3 consecutive scoreless innings in the NCAA Regional and Super Regional and being named to the Lincoln Regional All-Tournament Team alongside teammate Shane Komine. Duensing allowed 4 runs to the University of South Carolina in the College World Series, getting a no-decision. In 2003, Brian was 3-0 with a 2.42 ERA before an injury cut his season short. He had Tommy John surgery in March of 2004 and was redshirted. In 2005, the junior southpaw was 8-0 with a 3.00 ERA for the #5 team in NCAA Division I.

The Minnesota Twins picked Duensing in the 3rd round of the 2005 amateur draft, with their 6th overall selection; the pick was compensation for the loss of Cristian Guzman to free agency. Duensing was the 84th overall selection, one pick after Micah Owings. He was signed by scout Mark Wilson for a $400,000 bonus.

Duensing made his professional debut with the Elizabethton Twins in 2005, going 4-3 with a 2.32 ERA and striking out 55 in 50 1/3 IP. Had he qualified, he would have ranked third in the Appalachian League in ERA, ahead of Jesse Litsch. Teammate Alexander Smit impressed even more in strikeouts, though. Duensing did not make the Baseball America list of the league's top 20 prospects.

In 2006, Duensing pitched for the Beloit Snappers (2-3, 2.94), Fort Myers Miracle (2-5, 4.24) and New Britain Rock Cats (1-2, 3.65), showing good strikeout/walk ratios at each stop. In 2007, he led Twins farmhands in innings (167) and tied Jeff Manship for the most wins (15). He was 4-1, 2.66 for New Britain and 11-5, 3.24 for the Rochester Red Wings. He struck out 133 and walked 38. He was 3 strikeouts behind Manship for the lead among Twins farmhands. He was third in the International League in ERA after teammate Kevin Slowey and Garrett Olson and was two wins behind league co-leaders Heath Phillips and Mitch Talbot. He tied for 9th in the affiliated minors in victories.

Duensing joined Team USA for the fall of 2007. He pitched very well against the Silver and Bronze Medal winners in the 2007 Baseball World Cup, being used as Team USA's ace. He was 1-0 with a 1.86 ERA in the event. He pitched five scoreless innings against Japan before allowing a run in the 6th and being replaced by Neal Musser. Eight days later, he got the start in the Gold Medal game against the mighty Cuban national team. He threw four scoreless frames as the US built a 5-0 lead. In the 5th, he let Yoandry Urgellés and Eduardo Paret reach and both came home on a single by Alfredo Despaigne. Duensing was yanked in favor of Steven Shell. Shell wound up with the US's historic first Baseball World Cup Gold Medal game win over Cuba as Duensing had failed to work five full innings.

Brian was only 5-11 with a 4.28 ERA for the Rochester Red Wings in 2008. Duensing was a late addition to the US roster for the 2008 Olympics, after Geno Espineli and Clayton Richard were called up to the majors. Brian was 1-0 with a 1.17 ERA in Beijing, allowing 3 hits in 7 2/3 IP. He tossed 3 1/3 shutout innings for a relief win in a 5-4 victory over Team Canada. The only run he allowed in Beijing was a solo homer to Frederich Cepeda in a loss to the Cuban national team.

Duensing went into the tank in 2011 (9-14, 5.23, 77 ERA+). He tied Trevor Cahill and Félix Hernández for 4th in the American League in losses. Moving to relief in 2012, his woes continued at 4-12, 5.12. He led Minnesota in losses for a second straight year. His 55 appearances were 4th on the club behind Glen Perkins, Alex Burnett and Jared Burton. He opened 2013 sharper. On August 9th, he won both ends of a doubleheader against the White Sox, becoming the first major leaguer with two wins in a day since Luis Vizcaino in 2007, and the first in franchise annals since Walter Johnson back in 1923.

On May 16, 2015, he recorded a win while throwing only one pitch. He relieved Trevor May with two outs in the top of the 7th and the score tied 3-3; he got Kevin Kiermaier to ground out to second on his first pitch. The Twins then scored twice against the Tampa Bay Rays in the bottom of the 7th and Blaine Boyer replaced him in the 8th as the Twins held on for a 6-4 win. It was his seventh and final season with the Twins. He finished at 4-1, 4.25 in 55 games.

In 2016, he first signed with the Kansas City Royals in spring training but was released in mid-May without having pitched in the majors. He then joined the Baltimore Orioles as a free agent and went 1-0, 4.05 in 14 games. he also pitched a third of an inning in the Orioles' loss to the [2016 Blue Jays|Toronto Blue Jays]] in extra innings in the Wild Card Game. In 2017, he joined the Chicago Cubs, again as a free agent, and was 1-1, 2.74 in 68 games, striking out 61 in 62 1/3 innings. He was credited with a win in the Division Series against the Washington Nationals, and then with a loss in the NLCS against the Los Angeles Dodgers. He gave up just 1 run on 1 hit in 5 1/3 innings in the postseason, although he did walk 4 batters. In 2018, he was back with the Cubs but had a lot less success as his ERA ballooned to 7.65 in 48 games. Ironically, he still managed to go 3-0 with 1 save - his first since 2015. He was not used in the postseason as the Cubs made an early exit, and then was released at the end of spring training in 2019. He had a season left on a two-year deal signed after his solid 2017 season.