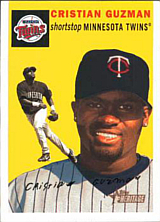 Cristian Guzman originally wanted to be a basketball player, but his uncle helped change his mind by telling him, "who in the NBA is from the Dominican Republic? Nobody." (Although, there have been four players born in the DR to make it to the NBA).

On August 28, 2008, he hit for the cycle while playing for the Washington Nationals. The next Nationals player to pull off the feat would be Trea Turner, on April 25, 2017.