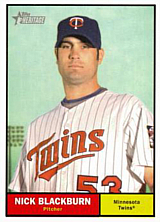 Nick Blackburn was drafted by the Minnesota Twins as a draft-and-follow pick in the 29th round of the 2001 amateur draft. After a second year of junior college, he was signed by scout Gregg Miller and made his pro debut in 2002. Nick spent six seasons with the Twins, with double digit victory totals each year from 2008 to 2010 while leading the AL in hits allowed (240) in the middle of that stretch. His career ended after six Triple A starts in 2013. Blackburn became an assistant coach at Mid-America Christian University in 2020 [1].