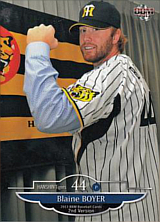 Blaine Boyer was drafted by the Atlanta Braves in the 3rd round of the 2000 amateur draft. He was signed by scout Rob English and made his pro debut that summer. He first reached the major leagues with the Braves in 2005. Used exclusively as a reliever after being a starter in the minors, he had a solid rookie season, going 4-2, 3.11 in 43 games. His career after that was more of a roller coaster than the typical reliever's. He pitched for the Braves every season between 2005 and 2009, but an injury in 2006 limited him to two-thirds of an inning, and then he spent most of 2007 as a swingman with the AAA Richmond Braves before returning to Atlanta for 5 late-season appearances. In 2008, he made 76 appearances for the Braves, second on the team behind Will Ohman, but his record was a disappointing 2-6, 5.88.

He was traded to the St. Louis Cardinals for Brian Barton on April 20, 2009, but after 15 games, he was placed on waivers and claimed by the Arizona Diamondbacks in early June. Between the three teams, he went 0-2, 4.12 in 48 games. In 2010, he pitched 54 times for the D'backs, with a record of 3-2, 4.26, then joined the New York Mets as a free agent in 2011. Things did not go well as his ERA shot up to 10.80 in 5 games and he almost completely washed out of baseball. He pitched with two other organizations that season, the Cardinals and the Pittsburgh Pirates, but his nightmarish year included ERAs of 13.50 with both the Indianapolis Indians and Memphis Redbirds. He missed all of 2012 with an injury, started 2013 in AAA with the Omaha Storm Chasers before being sold to the Hanshin Tigers of Japan's Pacific League. He pitched well in 22 games, going 3-1, 2.67, which rekindled interest back in the United States.

Boyer signed with the San Diego Padres for 2014 and began the year with the El Paso Chihuahuas. He went 1-2, 3.10 with 7 saves in 25 games to earn another look at the majors, over three years since his last chance. He pitched well, going 0-1, 3.57 in 32 games with the Friars. Now re-established as a legitimate major league reliever, he moved to the Minnesota Twins for 2015 and put up a solid 2.49 ERA in 68 games, in spite of a 3-6 record. He was one of the main set-up men for closer Glen Perkins and recorded 19 holds. In 2016, he moved again, this time to the Milwaukee Brewers. In 61 games, he crafted a 2-4, 3.95 mark and re-entered free agency. The Braves locked him up to a minor league deal and released him before the season, Blaine logging his next big league time with the 2017 Boston Red Sox. He hung 'em up after 21 games and an eye-popping 12.05 ERA for the Kansas City Royals in 2018.

In his spare time, Boyer was involved with the Christian organization Exodus Road, whose purpose is to free young persons who have been used as sex slaves around the world. Former Braves teammate Adam LaRoche was also involved in the project. In addition to providing financial support, Boyer spent ten days overseas after the 2015 season working to free underage women working in brothels. Because of the danger of the work and the risk of reprisals from organized crime, he did not tell reporters about his activities at the time, and remained vague when prodded after LaRoche's controversial retirement from the game in the spring of 2016 brought their common activity to light.