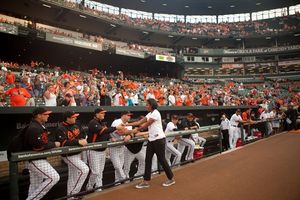 The 2010 Baltimore Orioles had the worst record in the major leagues at 15-39 when they fired manager Dave Trembley on June 4. They replaced him on an interim basis with third base coach Juan Samuel, while promoting Gary Allenson from AAA to take over Samuel's coaching duties. On July 29, the team announced that it had hired Buck Showalter to be its new manager, beginning on August 3. They became the first major league team to have three different managers each guide the team for at least 50 games.

The team improved tremendously under Showalter, playing more than 10 games over .500 and giving fans some hope for the future for the first time in many years.