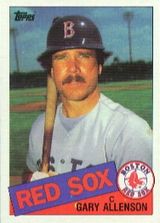 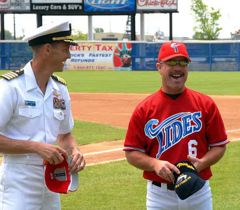 Catcher Gary Allenson was selected in the ninth round of the 1976 amateur draft, having helped Team USA to a Silver Medal in the 1975 Pan American Games. He was the International League MVP in 1978, when he hit .299 with 20 home runs and 78 RBI with the Pawtucket Red Sox. He played parts of seven seasons in the majors, primarily with the Red Sox, but was never able to fill the void left by Carlton Fisk when he departed for the Chicago White Sox in free agency. He became a spare catcher after a rough 1982 season, and finished his career up North with Toronto in 1985. In 1989, Allenson played for the Winter Haven Super Sox of the Senior Professional Baseball Association. He hit .340 in 43 games with the club. In 1990, he was with the Sun City Rays for the circuit's second season. He batted .313 in 10 games before the league folded.

Since his playing career ended, Allenson has been a major league coach and minor league manager. He managed the AA New Britain Red Sox in 1991 and was a Red Sox coach from 1992 to 1994 and a member of the Milwaukee Brewers staff from 2000 to 2002. After that, he managed the Bluefield Orioles in 2006 and the Norfolk Tides from 2007 to 2010.

On June 4, 2010, Allenson was brought up to Baltimore Orioles as a result of the firing of manager Dave Trembley. He took over for Juan Samuel as third base coach, while Samuel became the team's interim manager. He returned to Norfolk for 2011 and skippered the Aberdeen IronBirds before flying the Orioles coop to manage in the Toronto Blue Jays chain. From 2013 to 2017, he alternated managing their Double A affiliate, the New Hampshire Fisher Cats, and their Triple A outfit, the Buffalo Bisons.