The 1907 World Series featured the Chicago Cubs and the Detroit Tigers, with the Cubs winning the Series four games to none (with one tie) for their first championship.

The Cubs came back strong from their shocking loss in the 1906 World Series. The Tigers' young star Ty Cobb came into the Series with the first of his many league batting championships. With pitching dominance over the Tigers and Cobb, the Cubs allowed only three runs in the four games they won, while stealing 18 bases off the rattled Tigers.

Managers Frank Chance of the Cubs and Hughie Jennings of the Tigers, surrounded by Tigers players

October 8, 1907 at West Side Park in Chicago, Illinois

The Tigers scored 3 runs, in large part to 3 Chicago errors, in the 8th inning and held a 3-1 lead going into the bottom of the 9th. The Cubs loaded the bases on a single, walk and infield error with 1 out. Detroit conceded a run on a ground ball for the second out and Cub player-manager Frank Chance then used pinch-hitter Del Howard to bat for Joe Tinker. Howard struck out against "Wild" Bill Donovan (25-4 in the regular season) but the ball got away from catcher Boss Schmidt, allowing Harry Steinfeldt to score the tying run. Donovan got the next batter but the damage to Detroit has been done. The teams then played 3 scoreless innings before the game was called on account of darkness and declared a tie, a first for the World Series. The Cubs commit 5 errors and strike out 12 times in the game, but 9 stolen base attempts (7 successful) and 5 bunts (2 for hits) set an aggressive offensive tone that will pressure the Tigers for the remainder of the series.

October 9, 1907 at West Side Park in Chicago, Illinois

George Mullin, a 20 game winner and loser for Detroit in 1907 and who had walked over 100 batters in each of his last 5 seasons, issues a bases-loaded walk in the 2nd inning to tie the game at 1-1. Chicago scores 2 more in the 4th on a single, sacrifice bunt, RBI single, stolen base and double to take a 3-1 lead. Jack Pfiester, while allowing 10 hits, benefits from 2 double plays and battery-mate Johnny Kling throwing out 3 base stealers in gaining the win for the Cubs. Joe Tinker had a run scored and an RBI for Chicago, after being pinch-hit for in the 9th inning of game 1.

Cub pitcher Ed Reulbach scatters 6 hits as Chicago jumps on Tiger starter Ed Siever for 4 runs on 7 hits in only 4 innings in route to the victory. Johnny Evers has 3 hits, including 2 doubles, as the Cubs take a 2-0 lead in the series.

Detroit held a 1-0 lead on a triple by 20 year old batting champion Ty Cobb and an RBI single by Claude Rossman before a rain delay in the 5th inning. When play resumed, Chicago baserunners reached via an error and a walk. After Joe Tinker sacrificed, pitcher Orval Overall drove both runners home on a single to right field. The Cubs scored 3 more in the 7th without hitting the ball out of the infield on 4 bunts (2 for hits) and 2 ground balls. 23 game winner Overall was masterful after the rain delay, allowing only 1 hit in Detroit's final 5 at-bats, giving Chicago a commanding 3-0 lead in the series .

Chicago wrapped up the series with a 2-0 victory as Mordecai Brown pitched a 7-hit shutout. The Cubs scored a run in the first inning on a walk, stolen base and RBI single by Harry Steinfeldt and scored again in the 2nd on an error, a single, a double-steal and a ground ball out to drive in the final run. Detroit had runners on 2nd and 3rd with one out in the 4th inning, but could not score and never seriously threatened after that.

This Series would be the closest to a four-game sweep until the first true Series sweep in 1914. 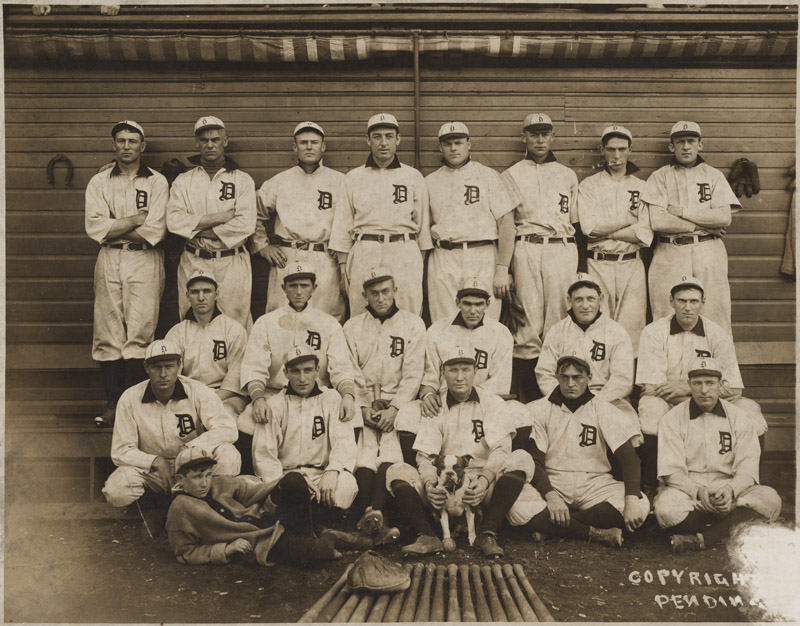