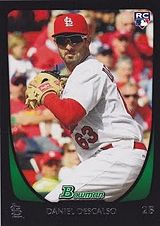 Daniel Descalso made his major league debut in 2010.

Descalso hit .320 as a college freshman, playing all 56 games (55 as a starter). He was the first true freshman to lead UC Davis in batting average in 38 years. He was named second-team All-NCAA Division I Independents. As a sophomore, he hit .284/.359/.401 while missing some time due to injury. His junior year, Daniel blossomed, batting .397/.474/.569. He led all players on NCAA Division I Independents in doubles (22) and hits (92) and was third in average. He was named All-Independent at third base. The St. Louis Cardinals picked him in the 3rd round of the 2007 amateur draft, making him the highest pick ever from UC Davis (Justin Reid, 4th round in 1999, had been the record-holder). He was signed by scout Jay North and began his pro career that summer.

In 2012, Descalso saw most of his action at second base, also playing at 3B and SS, while logging 143 games. His production fell to .227/.303/.324, although he did hit four homers. This time, he was a starter in the postseason, and after being held hitless in the Wild Card Game, was 6 for 19 (.316) with a double and a pair of homers and 78 runs scored as one of the key figures of the Cardinals' upset of the Washington Nationals in 5 games in the NLDS. Like most of his teammates, however, he was shut down by the San Francisco Giants' great pitching in the NLCS, being limited to 5 for 25 with a double. When the 2013 season began, young Matt Carpenter, a much more dangerous hitter, got the opportunity to start some games at 2B and went on an early tear, moving Daniel to the bench. Descalso was hitting below .200 when he made the most of an opportunity to start at 3B in place of an ailing Freese on May 21st, belting a grand slam and collecting 3 hits and 5 RBI and scoring 3 runs in a 10-2 win over the Giants. he hit .238 in 123 games, with 5 homers and 143 RBIs, splitting his time almost evenly between shortstop, second and third base. He also got significant playing time during the postseason, going 5 for 26 with 4 runs scored as the Cardinals returned to the World Series but were defeated by the Boston Red Sox in 6 games. He was back with the Cards as a utility infielder in 2014, playing 104 games as he saw playing time at all four infield positions and even once on the mound, while also being used regularly as a pinch-hitter. He hit .é242, but with no homers and only 10 RBIs, and was limited to just two at-bats in the postseason as the Cardinals were eliminated by the San Francisco Giants in the NLCS.

On December 16, 2014, Descalso signed a free agent contract with the Colorado Rockies. In 2015, the team was pretty much set in the infield with D.J. LeMahieu at second, Troy Tulowitzki at short and Nolan Arenado at third all being above-average players. Daniel was back to a back-up role, seeing time mainly at shortstop and second, but also being used at third, first and in right field. In 101 games, he hit only .205, although his power did pick up a but as he belted 5 homer and drove in 22 runs. For all that, his OPS+ was only 55, not much above replacement level. Heading into [[2016 Rockies|2016][, he was being looked at as a potential early-season replacement for new SS Jose Reyes, who was facing an early-season suspension for a domestic violence incident, but he was felled by a broken left hand suffered when hit by a pitch by Tom Gorzelanny of the Cleveland Indians on March 11th.

On July 11, 2018, playing for the Arizona Diamondbacks, Descalso made the 5th pitching appearance of his career. What was unusual about it was how early in the game it came: he moved to the mound in the 4th inning, with Arizona already down 14-1 to the Colorado Rockies. It was also unusual in that he pitched 2 2/3 innings (most of these type of appearances are for an inning or two) and fellow position player Alex Avila then succeeded him for the final two innings. The game ended 19-2 in Colorado's favor, and Descalso allowed a homer to Rockies pitcher German Marquez, but generally the two pitched well enough to spare the bullpen on a painful day. He played 138 games that season, with 349 at-bats, and hit .238 with 13 homers and 57 RBIs. In addition to two pitching appearances, he played 52 games at shortstop, 37 at third base, 11 at first base and 5 in the outfield, making him a true - and valuable - utility player. Following the season, he became a free agent and on December 18th signed a two-year contract with the Chicago Cubs with a team option for a third year.