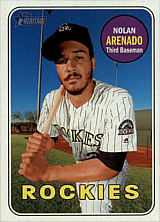 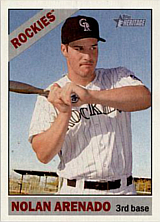 Third baseman Nolan Arenado was selected by the Colorado Rockies in the second round of the 2009 amateur draft and was signed by scout Jon Lukens. He made his pro debut that summer with the Casper Ghosts, hitting .300 with 2 home runs and 22 RBI in 54 games. With the Asheville Tourists in 2010, he posted a .308 average, 41 doubles, and 12 homers. He spent the next season with the Modesto Nuts and hit .298 with 32 doubles and 20 home runs, leading all of minor league baseball with 122 runs batted in. He spent the 2012 season with the Tulsa Drillers, playing 134 games and hitting .285/.337/.428, with 36 doubles, 12 homers and 56 RBI. He played in both the 2011 and 2012 Futures Game, representing the United States and was a Texas League mid-season All-Star in 2012, having been a California League All-Star the previous season.

Arenado made his major league debut with the Rockies on April 28, 2013, taking over as the team's starting third baseman after Chris Nelson was designated for assignment. Facing the Arizona Diamondbacks, he went 0 for 3 with a walk. He started the year red hot with the Colorado Springs Sky Sox of the Pacific Coast League, hitting .364 with 11 doubles and 3 homers in 18 games. He got his first hit and his first homer in his second big league game, against the Los Angeles Dodgers on April 29th. The hit was a single against Josh Wall in the 4th, and the homer was a two-run shot the next inning, also against Wall. He went 3 for 6 with 3 runs scored and 2 RBI in leading the Rockies to a 12-2 win. On June 5th against the Cincinnati Reds, he had the first four-hit game of his career, going 4-for-6 with three runs scored as the Rockies crushed the Reds, 12-4, getting 20 hits and 6 homers on the day. On June 7th, he hit a walk-off homer off Joe Thatcher of the San Diego Padres to lead off the bottom of the 9th and give the Rockies a 10-9 win. He finished the year at .267 with 29 doubles and 10 homers in 133 games and was named to the 2013 Topps All-Star Rookie Team as well as winning his first Gold Glove at third base.

Arenado started the 2014 season hitting very well. He was the first major leaguer to put together a twenty-game hitting streak, reaching 22 games on May 2nd. He hit .310 in April with 7 doubles and 4 homers, contributing to what was the most productive offense in the league in the early going. With a homer off the Texas Rangers' Martin Perez on May 5th, he extended the streak to 25 games, two shy of the club record set by Michael Cuddyer a year earlier. The Rockies feasted on the Rangers' pitching with a season-high 21 hits the next day, but Nolan had to wait until the 7th to extend his streak, pulling a ball that landed on the left field foul line for a double in a 12-1 win. On May 7th, he matched Cuddyer's club record with a two-run double off Colby Lewis in the 1st, sending Colorado on its way to another lopsided win, 9-2; he added another double and a single in going 3 for 5. He set the new team record the next day with a single in the 3rd inning of a 5-0 loss to Texas but his streak ended at 28 on May 9th when he went 0 for 3 against the Cincinnati Reds; in that game, however, he drew a key 9th-inning walk against Jonathan Broxton that kept a rally alive, allowing the Rockies to tie a game which they lost in the bottom of the inning. He was hitting .305 with 17 doubles and 28 RBI after 49 games when he broke his middle finger sliding head-first into second base on May 23rd. He returned to the lineup on July 3rd and ended up playing 111 games, with a .287 average, 34 doubles, 18 homers and 61 RBI. He repeated as the Gold Glove third baseman.

On April 14, 2015, Arenado flashed his Gold Glove form with a tremendous catch against the San Francisco Giants. San Fran had runners on first and second in the 8th inning when Gregor Blanco popped a ball towards the tarp on the third base side of foul territory. Arenado ran at full speed with his back to the plate, then stabbed his glove as he leapt over the tarp, catching the ball and falling halfway into the stands; he immediately turned around to throw to shortstop Troy Tulowitzki in an attempt to try to prevent runner Angel Pagan from advancing, although Tulo was unable to come up with the ball. Even though he was playing on the road at AT&T Park, he received a standing ovation, and many observers said the catch reminded them of Derek Jeter's epic catch of a foul ball under similar circumstances against the Boston Red Sox in 2004, one of the plays that cemented his legend. He was again a hero the next night, as he hit a three-run homer off Tim Lincecum to give the Rockies a 4-2 win and a three-game sweep of the defending World Series champions. It was a true breakout season for him with the bat, as on July 6th, he was leading the NL with 68 RBI and also among the league leaders in homers and slugging. He was named the NL's Player of the Month for September, when he hit .339 with 11 homers and 32 RBI in addition to 79 total bases. He homered in six consecutive games from September 1-5. He finished the season tied with Bryce Harper for the most homers in the league with 42; he also led the league and the majors in RBI with 130, 20 more than runner-up Paul Goldschmidt. He set a new major league record for most extra-base hits by a third baseman, with 89. After the season, he was rewarded with his third straight Gold Glove and his first Silver Slugger Award. 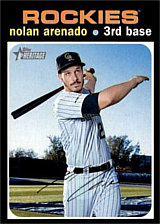 Arenado started the 2016 season relatively slow, with a .222 average and 2 homers over his first seven games, but on April 13th he burst out with two jacks and a career-high 7 RBI to lead Colorado to a 10-6 win over the San Francisco Giants. It was the start of another highly productive year, in which he led the NL in homers with 43 and RBI with 133, giving him back-to-back league-leading totals in both categories. His 352 total bases also led the league for the second straight year. He was an All-Star for the second time, won his fourth straight Gold Glove and repeated as winner of the Silver Slugger Award. In spite of these league-leading totals and awards, it was another third baseman, Kris Bryant of the Chicago Cubs who won the MVP Award, with Nolan finishing fifth. He was back raking in 2017, but there was a difference this time as the whole Rockies team was playing well and they had the best record in the National League in mid-June. On June 18th, he hit for the cycle for the first time of his career, and did so in spectacular fashion, completing the feat with a three-run, walk-off homer off closer Mark Melancon in the bottom of the 9th to give Colorado a 7-5, come-from-behind win over the San Francisco Giants. On July 19th, he had a tremendous game, going 5-for-6 with 3 homers and 7 RBI in an 18-4 win over the San Diego Padres, His first long ball came against starter Clayton Richard and the next two off reliever Kevin Quackenbush. He had a chance for a four-homer game but flied out against Kirby Yates in the 8th. Still, the three long balls tied a club record, last achieved in 2004, and the RBI were one shy of the team mark set by Matt Holliday in 2005. Andres Galarraga remained the only Rockies player with a six-hit game, achieved in 1995. Nolan was named the NL Player of the Month for July after finishing the month at .389 with 8 homers and 30 RBI. He finished the year at .309 with an NL-leading 43 doubles plus 7 triples and 37 homers, scoring 100 runs and driving in 130. He finished 4th in voting for the 2017 National League Most Valuable Player Award and played in the postseason for the first time, going 1 for 5, with his hit being a solo homer, in Colorado's loss to the Arizona Diamondbacks in the Wild Card Game.

Arenado had another great season in 2018 which included his fourth All-Star nod, his sixth Gold Glove Award and 4th Silver Slugger Award. He was again one of the top contenders for the MVP Award, finishing 3rd in the voting. In 156 games, he hit .297, led the NL with 38 homers, scored 104 runs and drove in 110. At 133, his OPS+ was the highest of his career, a reflection of the fact offensive numbers had gone down across the board in the majors that season. The Rockies came within a hair of winning a division title for then first time that season, finishing tied with the Dodgers after 162 games but losing a one-game playoff to them. Still, they returned to the postseason, and he was 1 for 5 in Colorado's extra-innings win over the Chicago Cubs in the Wild Card Game. He followed with a 2 for 11 performance in the loss to the Milwaukee Brewers in the Division Series, as he was unable to solve the Brewers' pitching, like most of his teammates.

After the 2018 season, he filed for salary arbitration, proposing a salary of $30 million for 2019; the Rockies replied with an offer of $24 million. Whichever way the arbitration panel was to decide, he was guaranteed to receive the highest salary ever granted through the process, topping the $23 million obtained by fellow third baseman Josh Donaldson a year earlier. On January 31st, the two sides agreed on $26 million, avoiding an arbitration hearing but still setting a record for an arbitration-eligible player. In late February, he reached a longer-term deal with the Rockies, signing for seven years and $234 million. He then started the season in an uncharacteristic slump - along with seemingly all of the Rockies' hitters. Heading into the game of April 14th, he had not yet homered in 15 games and had all of 6 RBI; not coincidentally, the Rockies were also mired in an eight-game losing streak. He finally hit his first homer that day, a three-run shot off Derek Holland of the San Francisco Giants to back up a one-hitter by German Marquez in a 4-0 win. On May 25th, he hit the 200th homer of his career against Andrew Cashner of the Baltimore Orioles. Returning to the All-Star Game for the fifth consecutive year, Nolan batted .315/.379/.583, enjoying his fourth 40 home run season and a fourth consecutive season with 100 runs scored.

He expressed his frustration before the 2020, as it seemed to him that the Rockies were not making any effort to improve after a disappointing 2019 season that saw them fall below .500 after making the postseason two straight years. Nolan hinted that if had known about this, he would not have signed a contract extension, bypassing possible free agency, and told the team that if that was the direction it was taking, they were free to trade him.

While Arenado's father was born in Cuba and his mother is from a Puerto Rican family, Nolan is a California boy through and through and hardly speaks any Spanish, something which his Latino teammates kid him about given his heritage. His father, Fernando, played all the way until junior college, and his brother, Jonah Arenado, was taken by the San Francisco Giants in the 16th round of the 2013 amateur draft, reaching Double A in 2018. His father was a big fan of Nolan Ryan and named his son after him. A cousin, Josh Fuentes, made his major league debut with the Rockies in 2019.