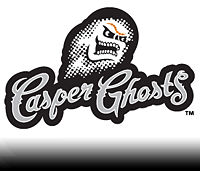 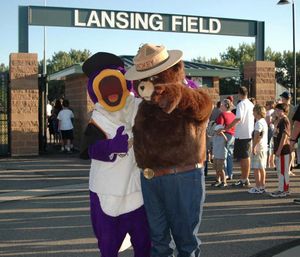 Smokey The Bear with the Ghosts' team mascot Hobart

After the 2007 season the Casper Rockies changed their name to become the Casper Ghosts. The announcement was done on Halloween to maximize the effect. The name is a play on the old cartoon character Casper the Friendly Ghost. Interestingly, no other professional baseball team had ever used the nickname "Ghosts." After the 2011 season the team was bought by the Rockies and moved to Grand Junction, CO, renaming the team the Grand Junction Rockies.

This page is in need of some additional content. Please help the Bullpen by expanding it, or learn how to contribute.
Retrieved from "https://www.baseball-reference.com/bpv/index.php?title=Casper_Ghosts&oldid=1076840"
Categories: