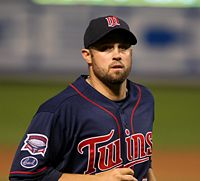 Michael Cuddyer was drafted by the Minnesota Twins in the 1st round (9th pick) of the 1997 amateur draft. In the 1996 World Junior Championship, he hit .367 for the Bronze Medal-winning Team USA. He was second to Dane Sardinha on the club with 5 RBI and tied Josh Bard for the most runs (5). He was on the US when they won Bronze in the 1997 World Junior Championship. Overall that summer, he hit .397 and slugged .853. He led the US with 26 RBI and 7 home runs.

In June of 2013, Cuddyer broke Dante Bichette's club record for the longest hitting streak in the history of the Colorado Rockies, which had stood at 23 games since 1995. Not only did he he catch Bichette, but he pushed the streak to 25 games with a homer off the San Francisco Giants' Barry Zito on June 28th. The streak eventually reached 27 games and ended when he went 0-for-4 against Clayton Kershaw of the Los Angeles Dodgers on July 2nd; it was the longest hitting streak of the year thus far, also matching a 27-game streak by David Ortiz of the Boston Red Sox which had begun the previous season. His former teammate with the Twins, Denard Span, had a longer streak later in the year. A week after Cuddyer's streak ended, he was named to the National League All-Star team. Cuddyer ended up winning the National League batting title with a .331 average. He was named the winner of a Silver Slugger Award in the NL for his hitting performance, which included 31 doubles, 20 homers and 84 RBIs in addition to the lofty batting average.

Cuddyer was off to another good start in 2014, hitting .317 with 4 doubles and 3 homer after 16 games, when he was placed on the disabled list on April 21st because of a strained left hamstring. While he was out, Nolan Arenado was putting together a hitting streak and erased Mike's club record when it reached 28 games on May 8th. He came back on May 20th but played only 15 games before returning to the DL, this time with a fractured shoulder. That injury cost him two months of action. He was back in uniform for a doubleheader against the Cincinnati Reds on August 17th and after going 1 for 5 in the opener, he hit for the cycle in the second game. he tripled and homered against starter Dylan Axelrod, then added a single and double in the late innings to complete his second career cycle as the Rockies swept the Reds, 10-9 and 10-5. He was the 30th major leaguer with two career cycles, but since his first had been hit with the Twins back in 2009, that made him only the third player in history to have accomplished the feat in both leagues, after Bob Watson and John Olerud. He then made a third stint on the DL with another strained hamstring and was out from August 24th to September 8th. On September 19th, he had a career-high 7 RBIs in a 15-3 wins over the Arizona Diamondbacks, thanks to a grand slam off Eury De La Rosa and a three-run double. He finished the season with a .332 average, with 10 homers and 31 RBIs in 49 games.

On November 10, 2014, he signed a two-year free agent contract with the New York Mets for $21 million. He played 117 games for the Mets in 2015 playing mostly in left field, although he saw increasingly less and less action after the Mets promoted rookie Michael Conforto and acquired Yoenis Cespedes in a trade in mi-season. He hit .259 with 10 homers and 41 RBIs. He went 1 for 11 in the postseason playing in the World Series in the Mets' loss to the Kansas City Royals. That turned out to be his final major league action as, in a stunning announcement, he walked away from the second year of his contract, announcing on December 11th that he was retiring at age 36.

He became eligible for the Hall of Fame in 2021 but was dropped off the ballot after failing to receive a single vote.