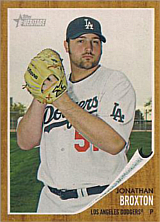 Jonathan Broxton broke in with the 2005 Los Angeles Dodgers. He was a two-time National League All-Star and a shutdown reliever.

As a senior in high school, he struck out 134 batters in 74 innings. A second rounder in the 2002 amateur draft, he was signed by scout Lon Joyce. Broxton moved up the minor league ladder steadily, always with an ERA of 3.23 or lower. In 2006, he appeared 11 times in Triple A without giving up a run. After 14 debut appearances in 2005, Broxton assumed a major role with the Dodgers in 2006. He appeared in 68 games, finishing 20, going 4-1 with 3 saves. His 2.59 ERA was far lower than the league average ERA of 4.49. In 2007, he appeared in 83 games with a 2.85 ERA. In 2008, he stepped in as the Dodgers' closer following an injury to Takashi Saito, saving 14 games in 70 outings with a 3.13 ERA and 88 strikeouts in 69 innings. He also picked up a save in the NLDS when the Dodgers swept the Chicago Cubs in three games. He played for Team USA in the 2009 WBC, then returned as the Dodgers closer in 2009. His flawless performance over the season's first half earned him an invitation to the All-Star Game. He ended the season with a personal best 36 saves, in addition to a 7-2 record and 2.61 ERA. He struck out 114 batters in only 76 innings. He then saved a game in each of the first two rounds of the postseason, as the Dodgers once again reached the NLCS but lost to the Philadelphia Phillies.

Broxton started the 2010 season pitching lights out and was again named to the All-Star team. His record at the break was 3-0, 2.11 with 19 saves, but he struggled mightily over the second half, picking up only 3 more saves in 25 games as his ERA was 7.13. Hong-Chih Kuo got most of the save opportunities when Broxton's struggles became so evident that manager Joe Torre could no longer trust him with a lead. The Dodgers and new manager Don Mattingly were concerned about Broxton's health heading in the 2011 season, including his weight, which had by then ballooned over 300 pounds. They reinstated him as closer to start the year. Although he did not always keep a clean sheet, Brox still managed to convert 7 of his first 8 save opportunities, but he posted a 5.68 ERA and gave up 15 hits and 9 walks in 12 2/3 innings while doing so. On May 3rd, he walked two consecutive Cubs batters on 8 pitches and took himself out of the game. The Dodgers decided to shut him down and have him undergo an MRI on his right elbow, concerned about the significant loss of velocity on his fastball, from 96 mph in his heyday to barely 90. The MRI showed a bone spur and a bruise, but no structural damage or need for surgery. Still, he was placed on the disabled list. He only made a couple more appearances that year, both with the Triple-A Albuquerque Isotopes. After the season, he signed a one-year deal with the Kansas City Royals with the understanding that he would no longer be a closer, but a set-up man for Joakim Soria - health permitting.

Plans changed quickly for Broxton in 2012 when Soria underwent arm surgery in spring training, leaving Broxton as the closer by default. He made a remarkable comeback from his previous struggles, saving 23 games in 35 outings with a 2.27 ERA. He was impressive enough to interest the Cincinnati Reds, who acquired him at the trading deadline on July 31st. With Aroldis Chapman on board as closer, he was to find another role in an already strong bullpen that also included Sean Marshall and Logan Ondrusek as very effective set-up men. He went 3-3, 2.82 in 25 games for Cincinnati, logging 4 saves as a very nice addition to the bullpen. He pitched three times in the NLDS against the San Francisco Giants and, while he did not allow an earned run, he was charged with the Reds' 2-1 loss in 10 innings in Game 3 on October 9th. This was a turning point for the team, as they had won the first two games of the series, but lost their chance to put away the Giants that day and ended up being eliminated.

In retirement, he became the head baseball coach at Edmund Burke Academy in Burke County, Georgia in March 2018. He brought on his father, Randy, as an assistant coach. The school won the state championship in Broxton's first season as head coach.